- June 25, 2019
So the next stop of Untold Tales which started with Golden temple, Amritsar
was Attari-Wagah border retreat ceremony.

As one of our fellow explorers Prathmesh said, We went from feeling highly spiritual to feeling passionately Patriotic in the very first day of our trip.

Beating Retreat ceremony consists of various activities and presentation by the BSF(Border security force) followed by a powerful parade by the soldiers and the coordinated lowering of both nation's flag.

While we were rushing in through the queue what we had in mind was what we had always seen in videos and tv, high towering soldiers with those fantail turbans kicking high in the air and marching strong. 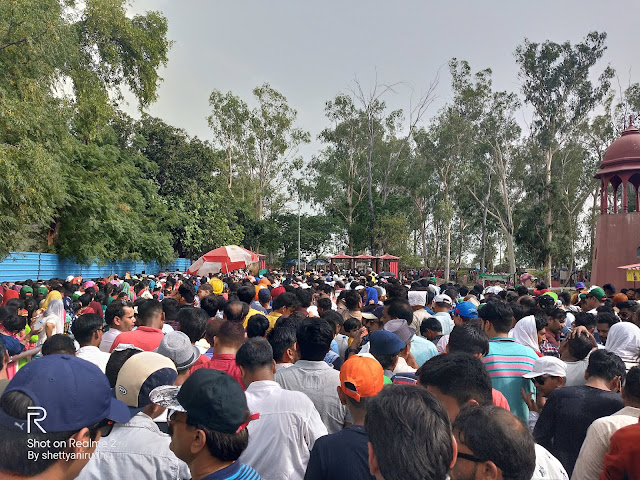 It was both funny and shameful to see lighters, tobacco and bidi packets scattered around the queue. Mostly people who were carrying these things heard the announcements informing of all the things prohibited and chose to drop it there instead of finding a dustbin. 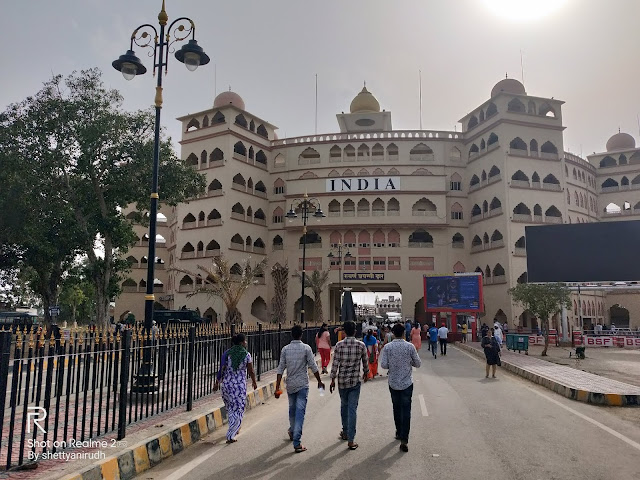 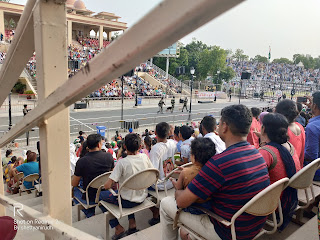 Once inside we rushed to find a sweet spot from where we could maybe look at the parade closely. The closest we could go is the railing which divides the ordinary from the VIP crowd 😁

But yes there was huge projector screens to help us Aam Aadmis/Aurats(ordinary crowd) get a close view of the parade.
We also had a view of the other side where the celebrations yes seemed subtle comparatively. Ignore the Indian pride speaking.


Once the event started there were three attractions for me other than the marching soldiers. 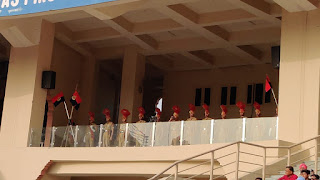 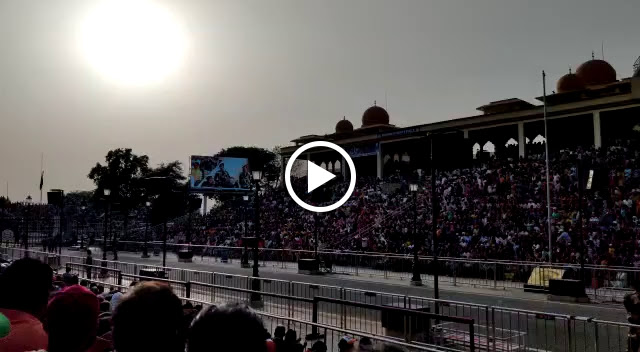 Before the BSF started their parades as per sun set timings, they encouraged crowd with slogans and also some lucky women and girls got a chance to wave our tricolor and also dance in the performing area to energetic Patriotic songs.

My favorite was when they played the song "Suno gaur see duniyawalon, buri Nazar na humpe daalo" from the age old album "Dus"
Growing up we had the cassette tape of this song other than all hundreds of devotional song cassettes my family owned. So this song has been a very first songs which I have heard on loop and enjoyed.

From our UTExplorers many girls were fortunate, they got to dance in the presentation area along with many other women. They clicked this picture from there.

The parade was equally fascinating, soldiers from both sides walking down the presentation area towards the gate and throwing high kicks and posing so as to challenge each other...flexing muscles at times, making aggressive faces....which seemed lil childish but was fun to watch!

My group had captured lot of videos but I won't be posting much, as I would recommend everyone to witness the ceremony for themselves and still if you want to see videos..YouTube kar lo..better quality videos you will find.

So all in all I enjoyed this experience a lot and was very Happy to know of this bond we share with our neighbor nation and how this ceremony continues even during times of conflicts, bad weather conditions or anything.


And yes I fell sick on the second day of the trip and the updates in the blog couldn't be done timely.
Now I am back home and hope to get the blog train going again.

Thanks you to all the travel companions who were very supportive and ensured I get well soon and get to enjoy the rest of the trip.