The Elixir that changed 2015 for me, a story of optimism.

"If you are having a bad day, it doesn't mean you have a bad life"

This quote I recently read on one of my colleague's desk.  Good one to make us developers from IT field cheer up on a hectic day.

This in combination with Lookup Stories at https://housing.com/lookup
encouraged me to share my Story of Optimism here.


I had many such times in my life where I was pushed to my limits almost on the verge of defeat and then was rescued by a small  yet powerful incident. The key was just to stay put & have belief that everything will be alright soon. Among all those stories, I would want to narrate the most recent one. The incident in my life which started this year with happiness and gave me hopes to be optimistic.

New year was nearing and I did not have any plans. In the month of December, I had already taken many leaves from office to visit Tamil Nadu. It would not be right, if I would have asked for more leaves. I made myself understand the same and decided to work through the new year.

Deep down I had expected that as the day nears, some plans will be made eventually. I was wrong. As days passed, my realization & resolution of being at work on new year's eve started becoming a regret. What was adding to all this bitterness was all of my friends asking me "So what are your plans for New Year?"
My instant reply would be "Nothing so far..."
They reply would be "Seriously!?"
As I recently shifted to Mumbai, all my friends from Mangalore would be surprised. They would say "You are in such a happening city, its not possible you don't have any plans"
Similarly friends from Mumbai would ask "You are going to Mangalore for new year's eve, right?"
Yet, I got through consoling myself that I had my share of fun and parties already.

It was not a big issue, right?  But then Human mind has its weird way of fixating on something and exaggerating it by making you realize  every small thing which adds to the bad situation.
Still this story is not about how my New Year's eve turned out to be a depressing end to a fabulous year. Instead, this story is about how 2014 ended with Happiness and 2015 started with optimism and new hopes.

Finally it was 31st and I was at office, the day went in a flash with all of us being busy in our respective issues and development. It was around 8pm when all my work got over, but I decided to say for longer. To kill time, I started blogging. One thing lead to another, I ended up writing 3 posts that night. The next time I checked the clock in my desktop, it was 11:15pm. I felt a little content to have completed 50 posts on my blog.

I started from office on my way home. It felt as if I was the only person going from the most happening places towards the not so happening. So no traffic, no crowd in train the journey back home was comfortable, dull yet comfortable.

Phew, at least I was not in office when it happened, Fireworks, shouts & music at the highest volume played, all in sync as if welcoming me home.

I entered and wished Mom “Happy New Year!” She smiled and said “Some courier has come in your name”
I was removing my sandals at the shoe rack and there it was placed above the shoe rack.
I grabbed it and wen to my room. I was excited now. Once the packaging was removed, there was another layer of wrapping. It was Gift wrapped, so this was not one of the things I had ordered.
Carefully I removed the wrapping, and my hands were feeling something like a book. I was not sure for some reason which I could not point out. Once it was out, I yelled “WOW!” 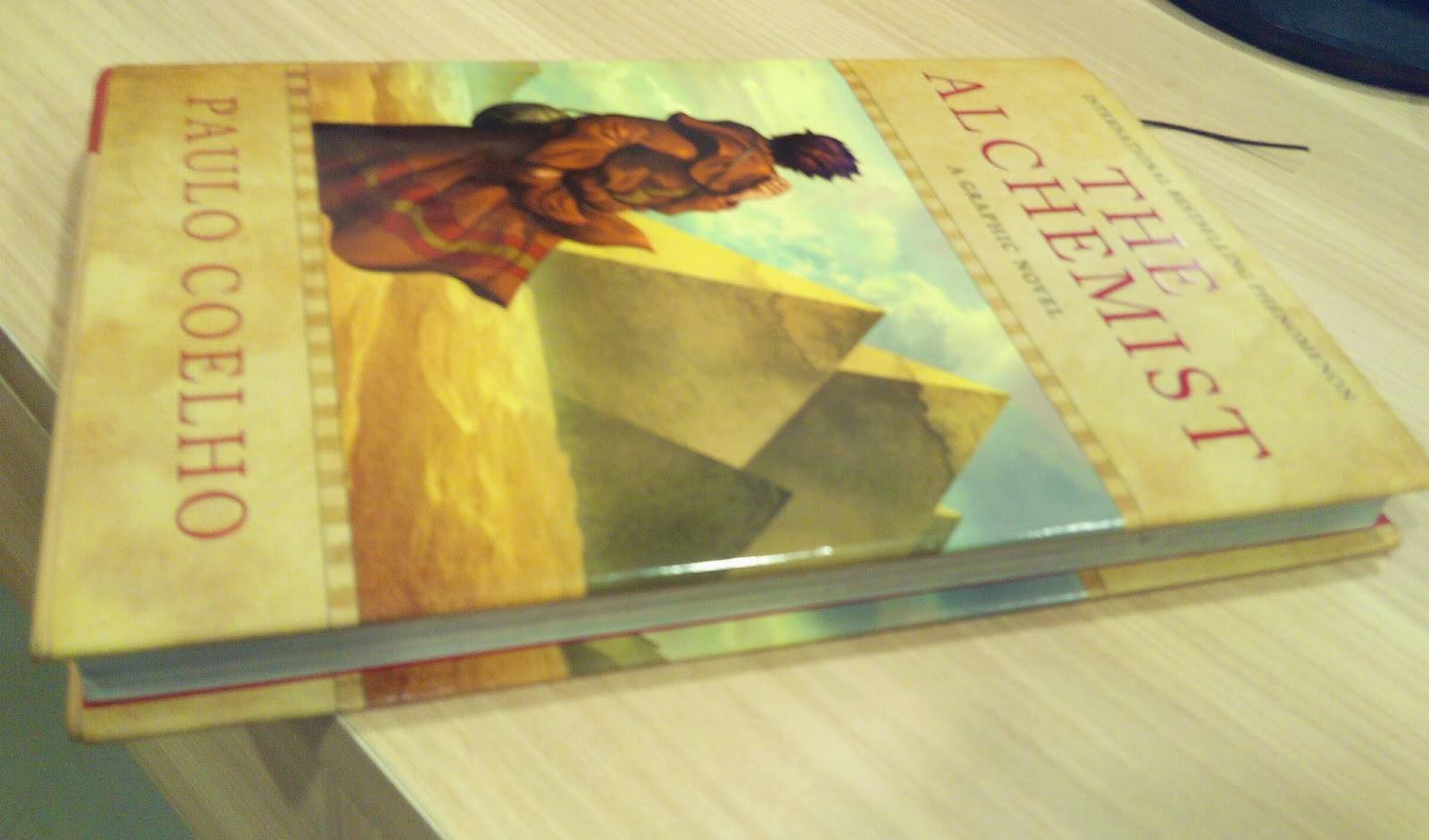 Now I understood, why I had doubts whether it was a book or not, because it was a hard cover.
My First Hard Cover Graphic Novel.

Now to tell you all, or maybe you already know. 'The Alchemist' is my favorite novel. This novel had helped me a lot, when I was in  a bad phase of my life. This novel had taught me to believe & have faith. It had given me courage and inspiration to take on the challenges of my life and come out smiling.  The graphic novel of the same was in my bucket list since 6 years now when I had  seen it in a book store. That day I had not opened it, I had promised myself to buy it someday for myself.
It is with me now.

As I slowly opened it, a note fell. 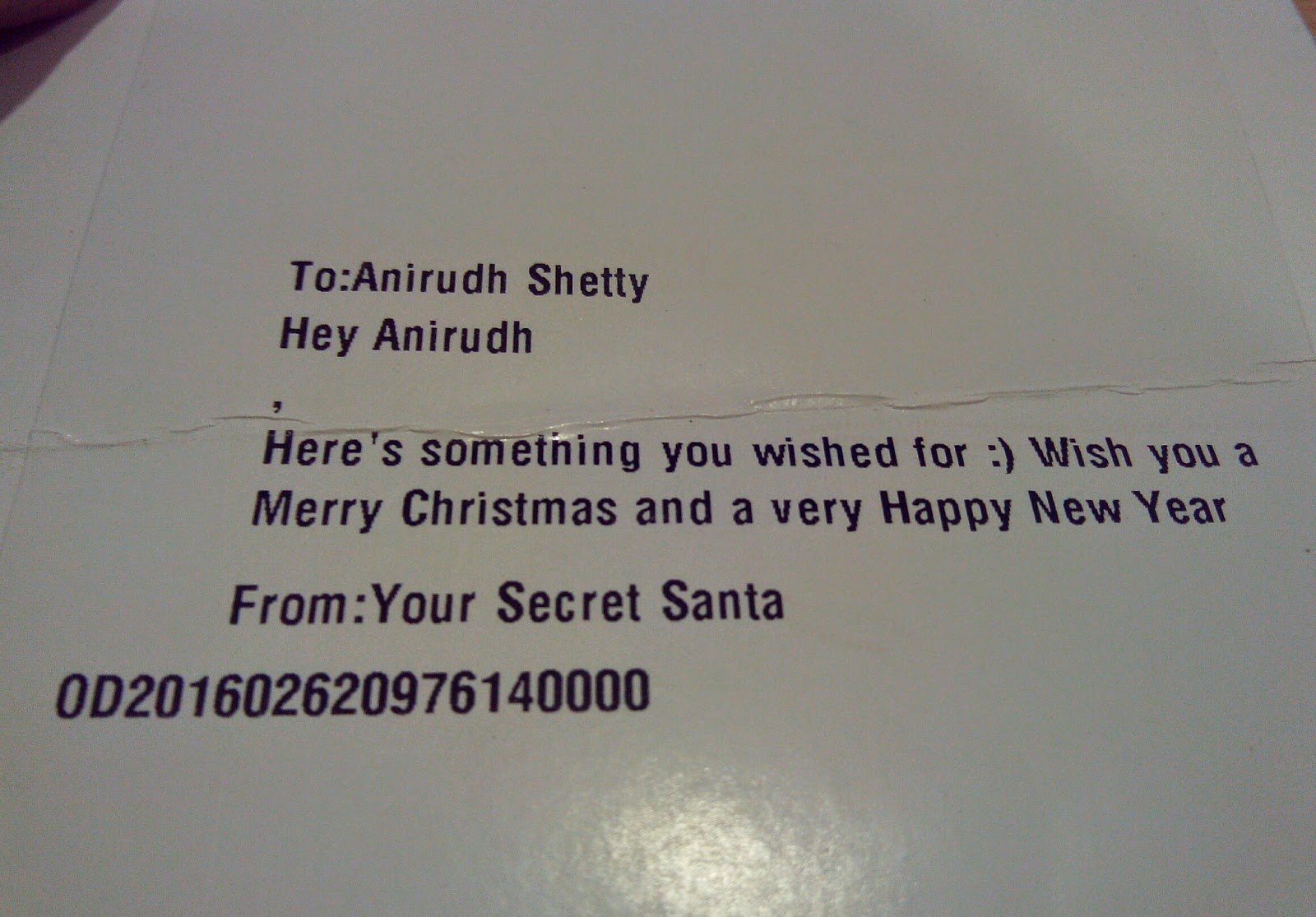 Yes, it was a Santa sending me this gift. A secret Santa online campaign which I had enrolled into.
There was no guarantee that I would get something after gifting some random person(I had gifted first two books of ”Game of Throne” series)
But I had believed.

I will never forget that moment in my life. A beautiful moment which restored my belief made the otherwise not very happening New Year a memorable one.

God bless the secret Santa who gifted me this. It was not just any book, It was a elixir among the books.

It was Happiness. It was Belief. It was reason to believe & be Optimistic throughout the year.

For your dose of positivity, do visit
https://housing.com/lookup