Everyone today is aware of
Nirbhaya, pseudonym of the girl who was brutally raped & murdered on 16 December, 2012 in New Delhi
Like many hopeful Indians, I too kept reading news articles regarding this case in a hope that justice will be done.
Once the verdict was given by Delhi High Court, we felt little relived. They were given death sentence except for a juvenile. The case is still pending after the decision was challenged in Supreme court, but I am sure justice will be done.

The people of Delhi made it a point to bring to the notice of the officials the shortcomings in our laws regarding Rape &  assaults against women.
We saw outcome here with the Amendments made. The Criminal Law (Amendment) Act, 2013

As a part of BBC's storyville Series made a documentary on this incident.
This documentary was banned in India.
Many condemned this ban, some supported the same, I stayed neutral. I had not watched it. For me what was more important than the video was justice & betterment of our society.

Through the days, I saw changes. In my city,  Mumbai. With constables in ladies compartment of local trains at night.

But few days back one of my friend, a girl saw this video. We had a small argument later. I was left shaken.

I countered by telling she is being a pessimist. I said, instead of complaining these women must fight against injustice. Raise their voice.
I said government alone cannot do much & we must support instead of criticizing.

Next day, I saw the documentary.

I understood. Why I was wrong & why she felt the way she did.
The documentary consisted of interviews of one of the convicts "Mukesh Singh" & their defense lawyers.

Mukesh Singh said in the interview
"When being raped, she shouldn’t fight back. She should just be silent and allow the rape. Then they’d have dropped her off after ‘doing her’, and only hit the boy."
"A girl is far more responsible for rape than a boy … A decent girl won’t roam around at nine o’clock at night … Housework and housekeeping is for girls, not roaming in discos and bars at night doing wrong things, wearing wrong clothes."

A. P. Singh, the defence lawyer said
“If my daughter or sister engaged in pre-marital activities and disgraced herself and allowed herself to lose face and character by doing such things, I would most certainly take this sort of sister or daughter to my farmhouse, and in front of my entire family, I would put petrol on her and set her alight.”

These statements are scary!
Even after committing a heinous crime like that, the convict did not have a inch of regret.
What was worse was their defense lawyers were equally sickening.

We may see to it that Nirbhaya gets justice, but


I realised how it is easy for men to just analyse these issues, argue and express their viewpoint. Its the Women who have to bear the consequences, live in fear.
After a girl sees this video, she will feel highly threatened & unsafe and nothing can be done to make her feel better at that moment.

I understand its the Freedom of Expression which makes it possible for such creeps to deliver statements which instill fear in our society.
So I will use my freedom of speech in support of Women.

I will speak out to make the women in our country know that if there are such perverts, then there are men who will do everything to protect women from them too. 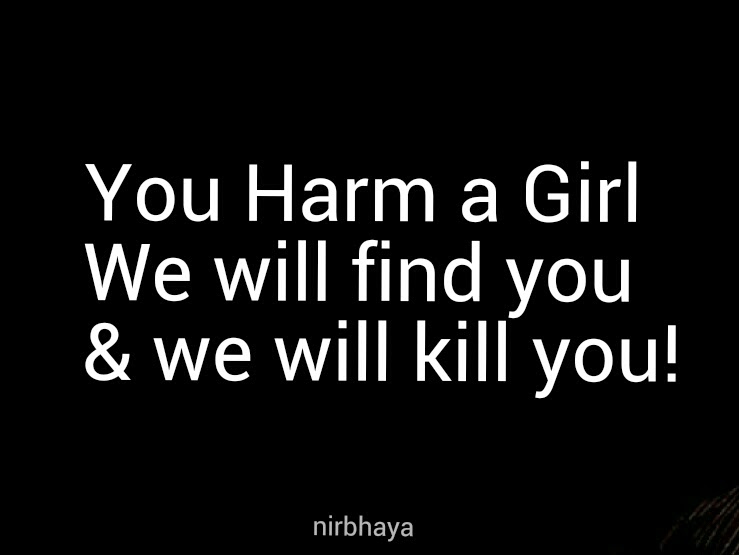 I will make it a point to bug my friends to get me the same statement in different language scripts and will keep updating with new ones.
With today's whatsapp connectivity, I am sure this would reach out to many within a day.

I wi not just stop at making & sharjng thus silly image, but will make sure to do everything possible for me to improve the scenario.

So this Women's day, I pledge to stand up(not just in terms of words, but action too) for Women and make sure there won't be another Nirbhaya.