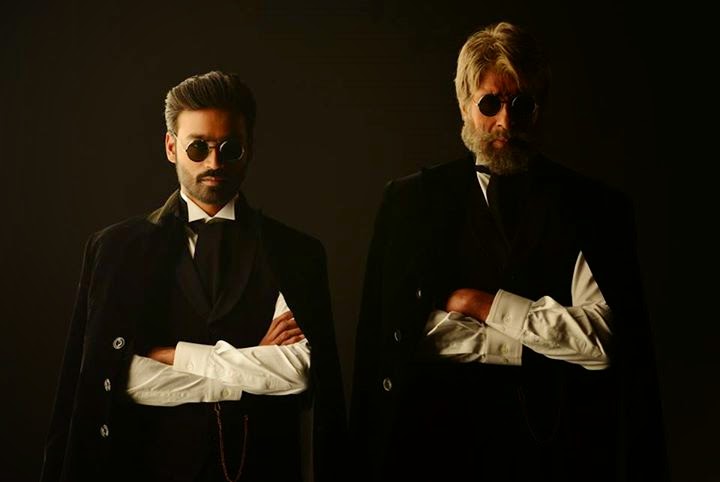 Instead of being a epic movie, it turned out to be a disappointment. Some may even term it a sandwich of Advertisements and a Movie by R Balki.
I still wouldn't call it a complete disappointment, because of the cast who gave their best to keep the audience from getting bored.
Starts with some enthralling performances, especially from a child artist who plays the younger version of Danish(Dhanush's character). Gravity is well created for the forthcoming, while the story builds up. Even the ad placements seem acceptable till the first half. Even though Lifebouy is very oddly brought in, it can be accepted as part of humor.
The film continues to have audience curious till the interval. But the ad break during he interval kills it all. With a long interval, filled with ads. Some of which are even repeated, so much so that the crowd at the multiplex I was watching got irritated enough to shout abuses.
After the interval, everything you expect happens. Expected (and Hinted in trailers) ego clashes, fall out, flops and so on. The series of expected is not the only disappointing factor, the character traits shown by Dhanush are also unacceptable and doesn't gel with his character. A struggling ambitious actor who goes all egoistic and stubborn after one hit movie that he is ready to risk his movie career, moreover has no respect for the people who helped him.
There are some enjoyable scenes and concepts in the movie, but again they are repeated and stretched throughout. Starting with Amitabh Sinha's (Amitabh Bachhan's character) drunkard scenes, the "Pee" connection behind song titled "Piddly" and the wine-water analogy.
In a attempt to bring in a dramatic climax, they elongate the scene so much that it becomes so very obvious. Unnecessary and incomplete plot also comes in where a prying journalist comes in with some exposing facts and reaches the conclusion just to disappear during the climax of the movie.
After venting out all my frustration on the movie for spoiling such a magnificent idea that was, I still would say it is a One time watch.
You could surely watch the movie once to experience the Amitabh-Danush duo magic.
Even the debut actress Akshara Hasssan does extremely well in adding her charms to the movie. There are some enjoyable moments in the movie thanks to her acting as a struggling Assistant Director trying to keep the Shamitabh duo together.
The First half, Shamitabh duo and some good acting from the cast is what makes the movie a one time watch.
Akshara Hassan Amitabh Bacchan Bollywood Dhanush Movie Piddly Review Shamitabh