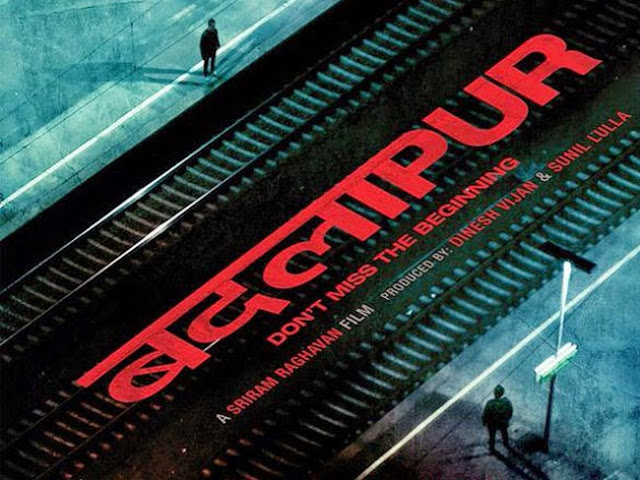 I have done wrong I feel. After repeatedly catching all the bollywood movies for past some weeks and writing a review about the same, I missed "Badlapur"
I watched it on the day of its Release.
Even though I had typed the review praising the movie on the same Friday of its release I didn't post the review.
Reason, I missed the beginning.
Yes I went into the theatre 15 minutes late. So even though I loved everything in the movie I was unable to press the publish button.
Such a irony, the tag line of movie says "Don't miss the begining" and I exactly did that.
So I entered at the point where the revenge part has started.
I enquired with my other friends and later came to know I had not missed much.
There was a burning desire in me to reach out to my readers and say this out loud
"It was a awesome movie"
So here it is....
The Review
Starting with the storyline from what we decipher from the trailers, the main plot was quite obvious being a revenge story of a man whose family was killed. I expected the plot to loop around and stretch the same revenge for family idea, but Sriram Raghavan being the director I hoped for more. The movie did deliver more with the story being lot more than just vengeance. Exploring depths of each character and offering some well placed twits and turns. This movie was not one of those slow moving thrillers, but keeps the momentum and interest of the viewer at peak. Everything in the movie blends in well and nothing feels forced,  exaggerated or not required.
Acting by each of the actors is spellbound.
Varun Dhawan does well in breaking his stereotype image. There are moments in the movie where Varun's character "Raghu" single handedly commands the attention of viewers. His eyes & expression do a lot of talking, adding so much depth to his character.
Nawazuddin Siddiqui's character Layak , is one who adds fun to the otherwise serious movie. Being the new age villain in the movie, he excels yet again in moulding a interesting character.
There are many other actors to look out for, who have given good support but yes these two command the whole movie.
Yes, the climax of the movie also doesn't disappoint at all!
It does complete justice to the whole plot, that makes watching the movie truly worth and makes me believe that there is still hopes for Indian Cinema. (My feelings cause of the recent "Hit & Run Crap" blockbusters.
badlapur Bollywood Movie Review