- January 09, 2015
Tata Motors is all set to launch the Bolt hatchback on 22nd of January.
A set of Bloggers were invited to experience the Bolt Arena and Blog about it, I was one of the lucky ones.
I visited the Bolt Arena on 4th January, Sunday in Inorbit Mall, Vashi. 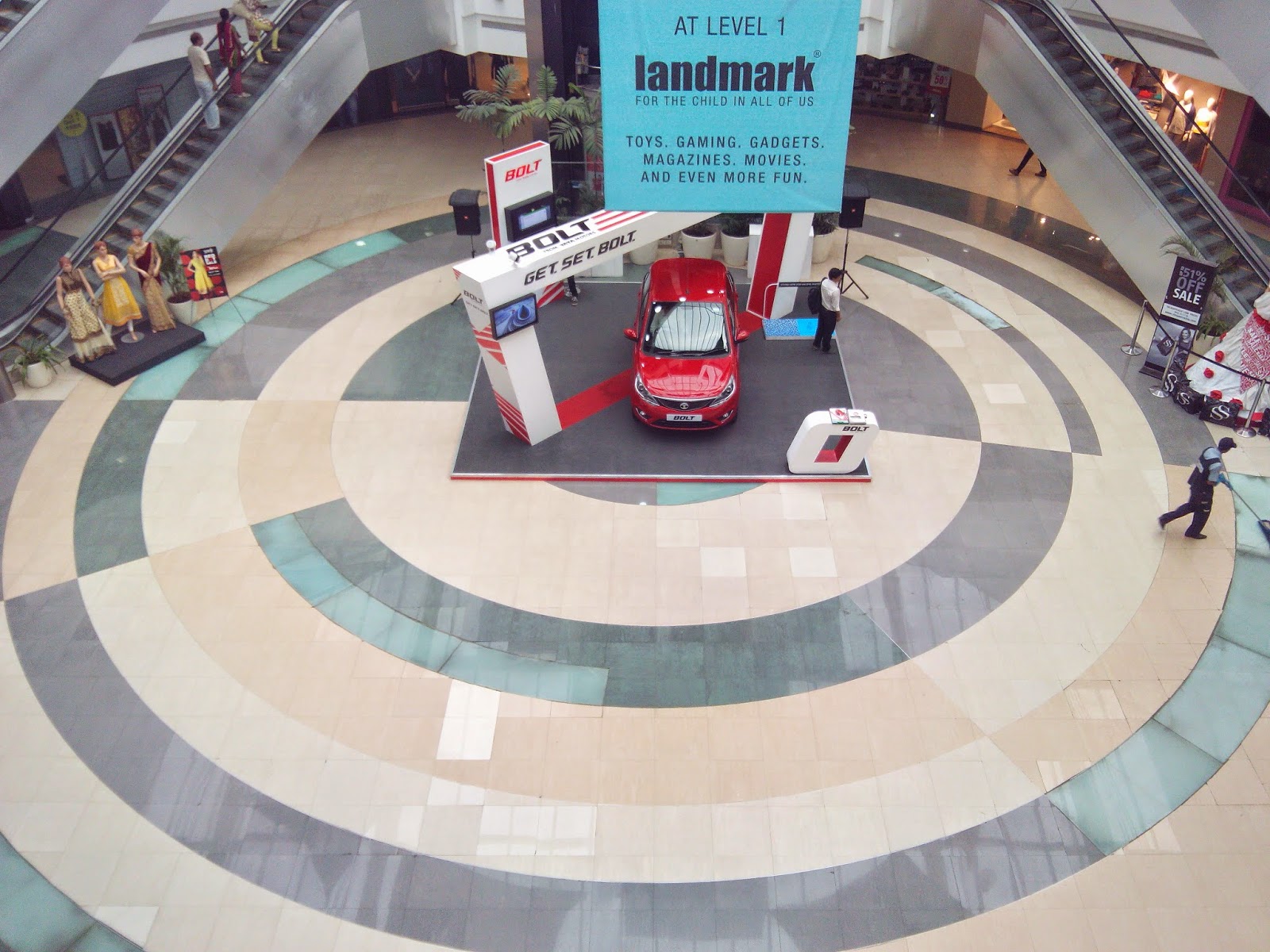 True to what was promised, our experience at Bolt Arena was energetic and fun with fresh concepts introduced which was true interaction with the Customers.
The Bolt Arena offered us with many a  opportunities, and I experienced and enjoyed each one of it! 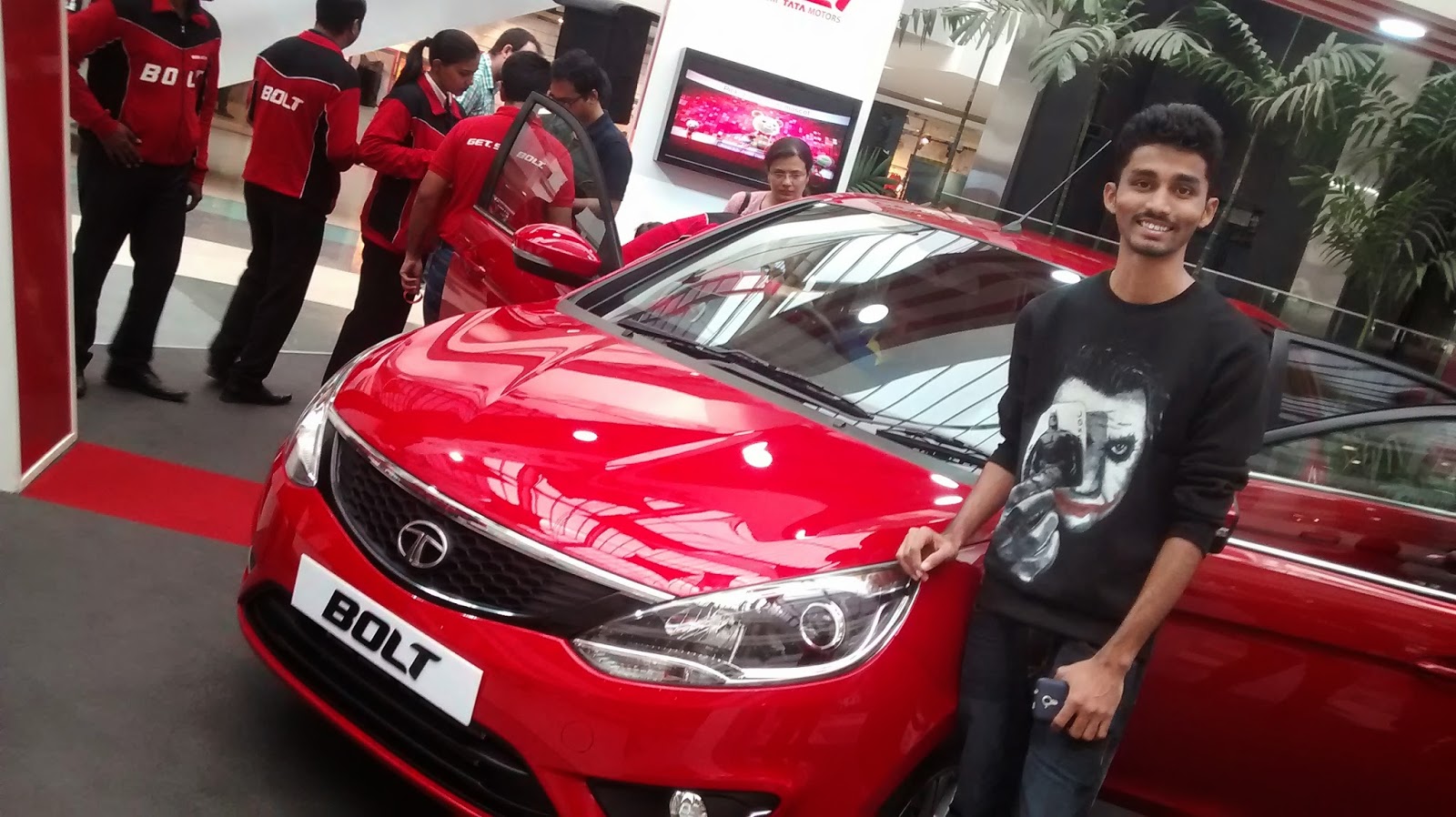 A Chance to experience new Hatchback from Tata, Bolt before its launch!

”BOLT”. The name might sound quite familiar to all the athletics fans. Yes, you guessed it right. Usain Bolt. But what is this name doing in the automobile industry. “A mighty flame followeth a tiny spark”. A new idea of a premium hatchback from Tata Motors led to the evolution of the Bolt.
Tata Bolt is part of HORIZONEXT by Tata Motors, a four-pronged customer-focused strategy, providing the best customer experience right from the purchase to experience and also the service.
At the front it gets an aggressive fascia, new grille and sleek headlights that stretch from the middle of the bonnet to the grille. Large amounts of chrome looks quite premium. On the sides, the window lines swoop down in a curve towards the rear hatch which now seems to be devoid of the Christmas tree lamps. However, what the rear does get are rounded edges and certain styling cues from slightly more premium cars. The Bolt looks like a much more complete product.
It features a white and black combination interior setup with seemingly premium plastics as well as gauges mounted behind the steering and a touch screen created by Harmann for the Tata Bolt. However, on the lower spec variants we expect that Tata will offer beige interior. 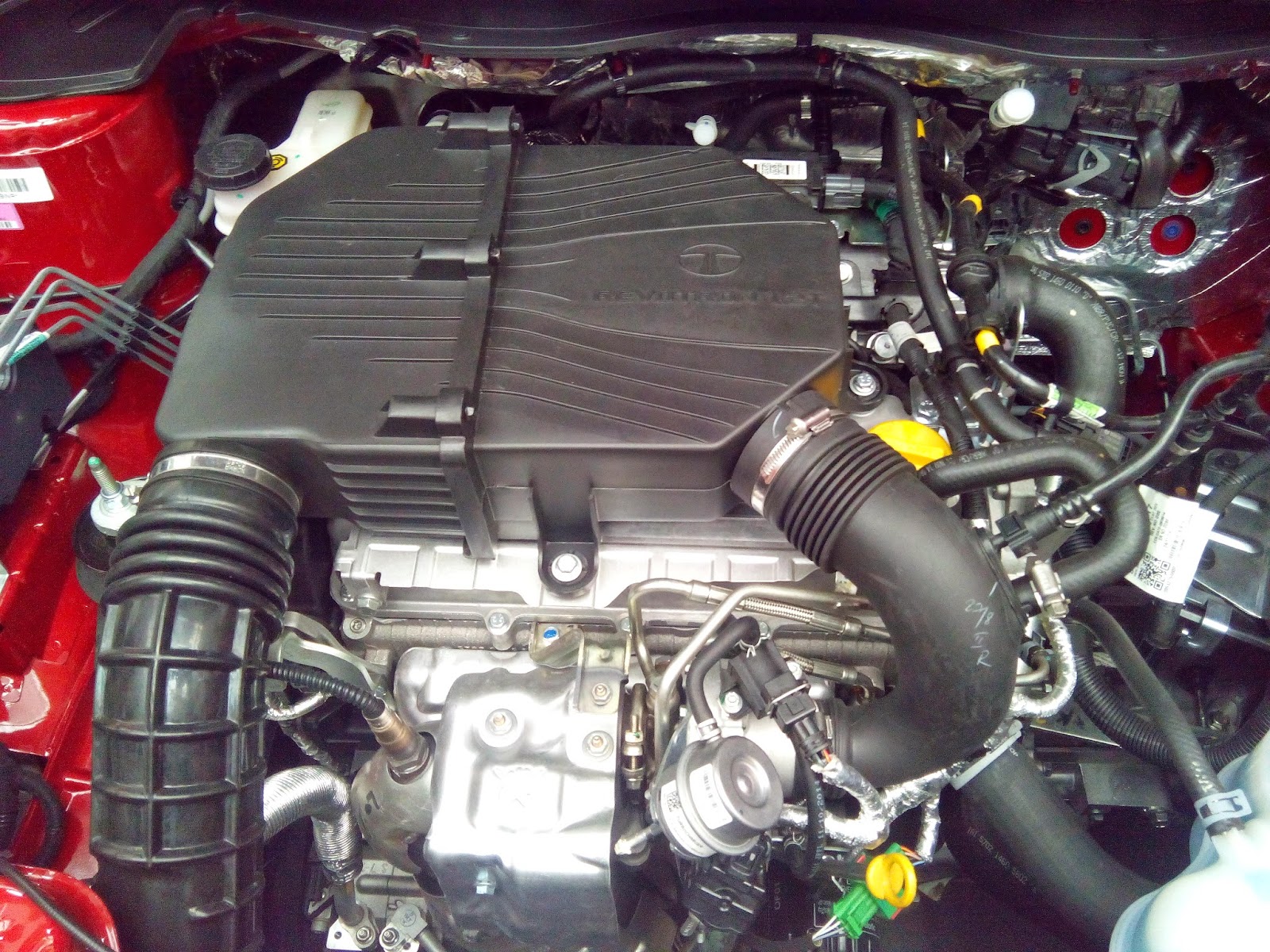 The bolt also houses many modern day features. It has 3 driving modes namely SPORT, ECO & CITY. By these names we can guess their functionality. When you are in need of power at open highways you can choose the SPORT mode. If you want efficiency then the ECO mode. The CITY mode strikes a balance between these two.
It is powered by a Revotron 1.2-litre Turbocharged MPFi petrol engine and a 1.3 litre Quadrajet for the diesel version. This churns out 84bhp/140Nm and 89bhp in the petrol and diesel versions respectively. This is very powerful compared to the likes of other cars in this price bracket.
Especially these days safety is also a main concern for automobiles. The BOLT has 9th gen ABS by BOSCH, Corner Stability Control and Dual Airbags. I’m pretty sure that other car manufacturers cannot compete with the BOLT for its features and the price in this category.
It is also very spacious for a hatchback and also has a premium feel to it with the cosy interiors. Another feature in the car is the ConnectNext. A fusion of information and entertainment packed with a touchscreen by HARMAN. It  It also has smartphone enabled navigation facility by MapMyIndia and assists advanced voice command navigation.  Harman that features video playback from SD card, Aux and USB support, smart phone based navigation system, Bluetooth connectivity, voice recognition, in-built HVAC controls, and smartphone integration; and a new multi-function steering wheel.
There is no denying that Tata Bolt is a really important product for Tata Motors, since it's one of the first two products built for global markets. The company says that the name Bolt itself signifies speed and represents, according to the company, a winner’s attitude. The Bolt will be pitted against the likes of Maruti Swift, Hyundai Grand i10 and other B segment hatchbacks. Expected price is Rs. 4.5 lakh - Rs. 6.5 lakh.

Exciting & Engaging Contests which would lead into wining the Bolt or getting featured in Bolt's next promotional video. 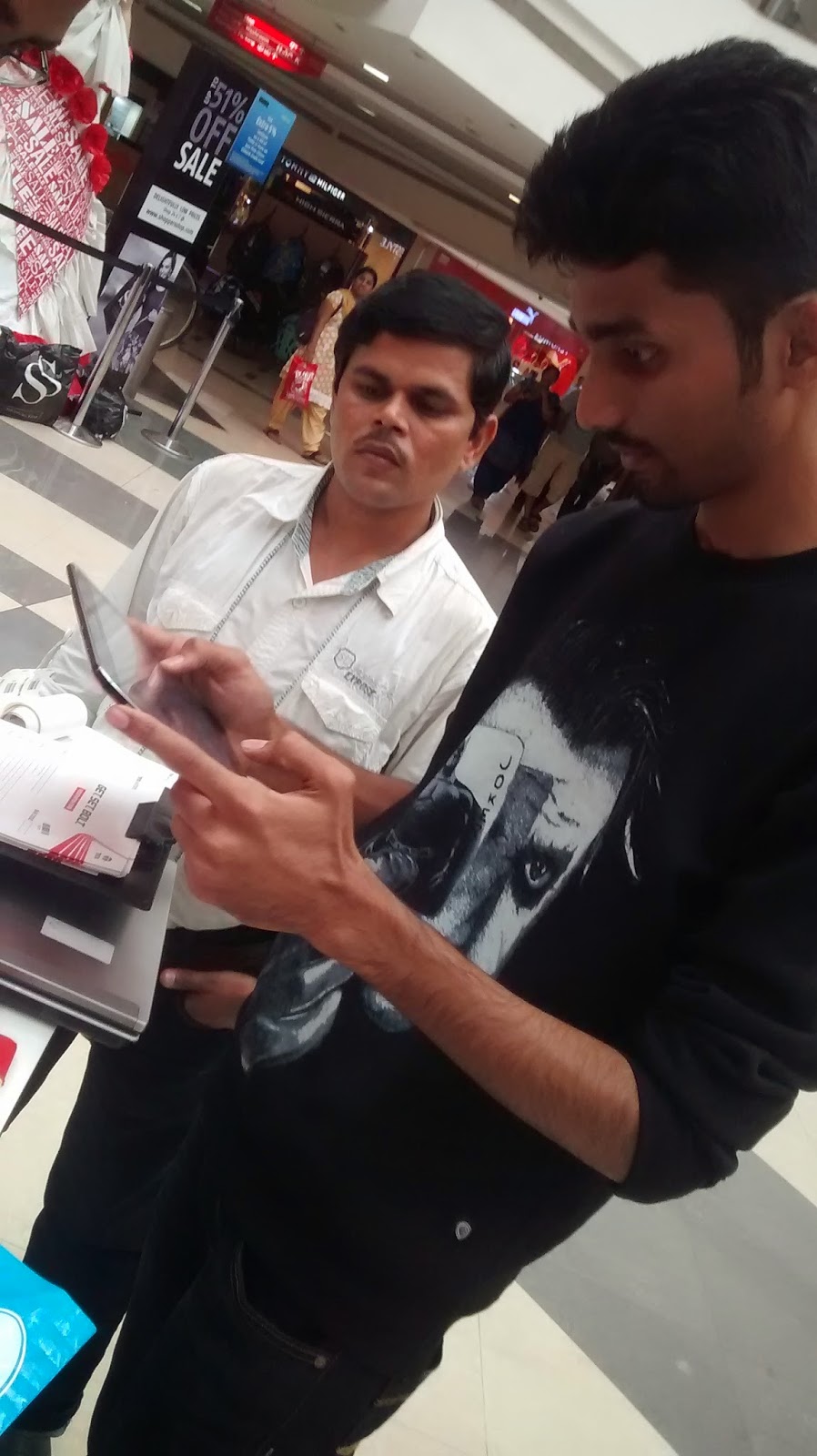 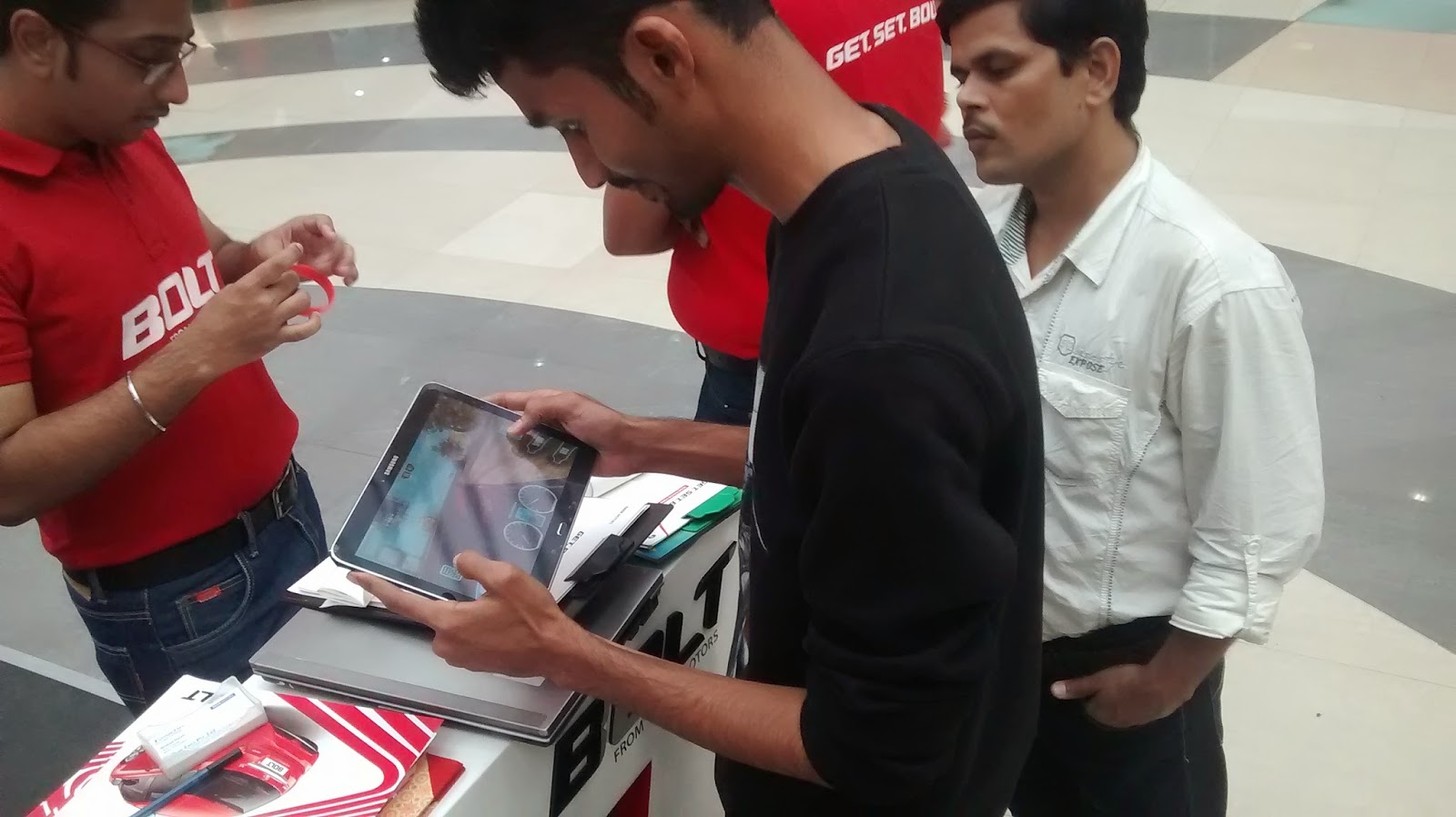 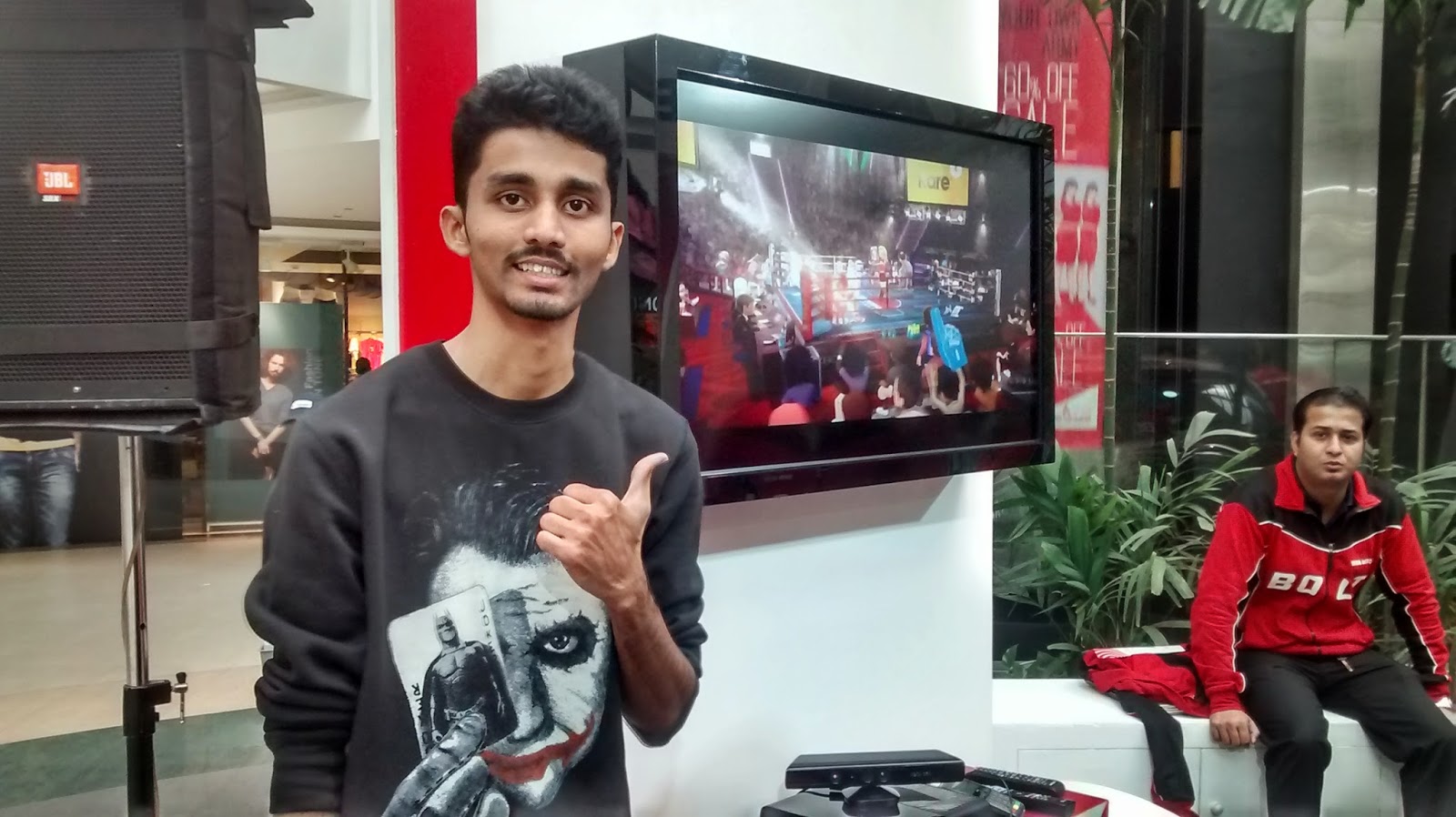 Many games on PlayStation Kinect 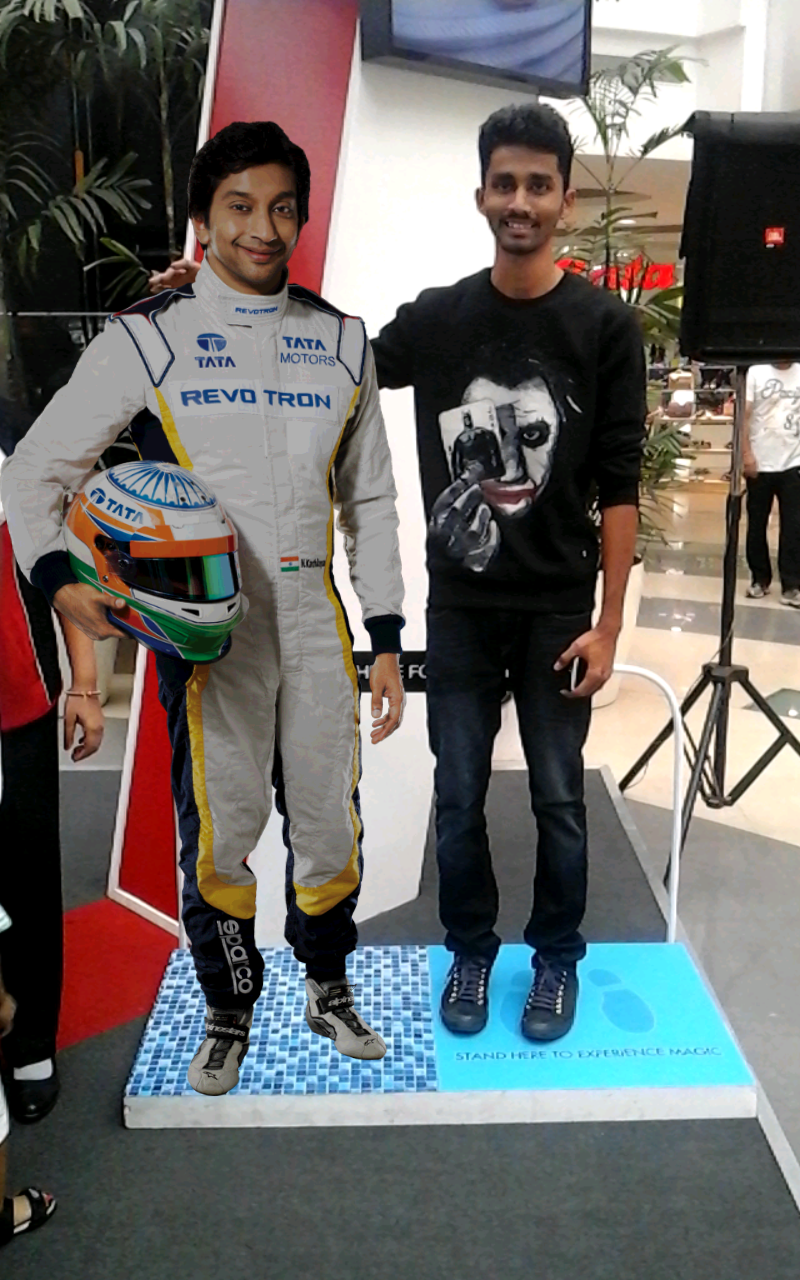 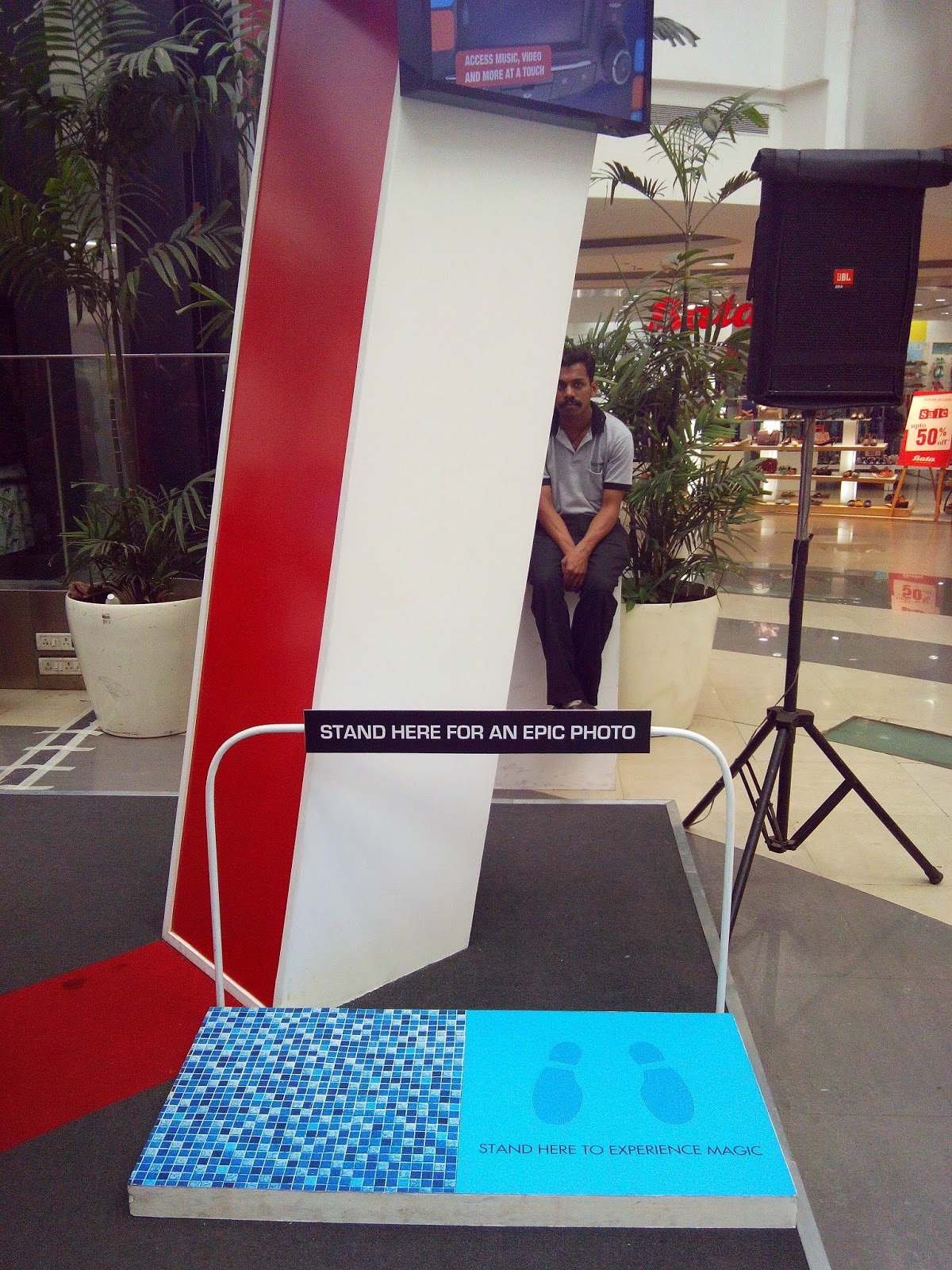 Augmented reality booth
(get a pic with Narain Karthikeyan)

Yes, We won prizes too!!
By answering all the questions asked by the Bolt Arena team about Tata Bolt! 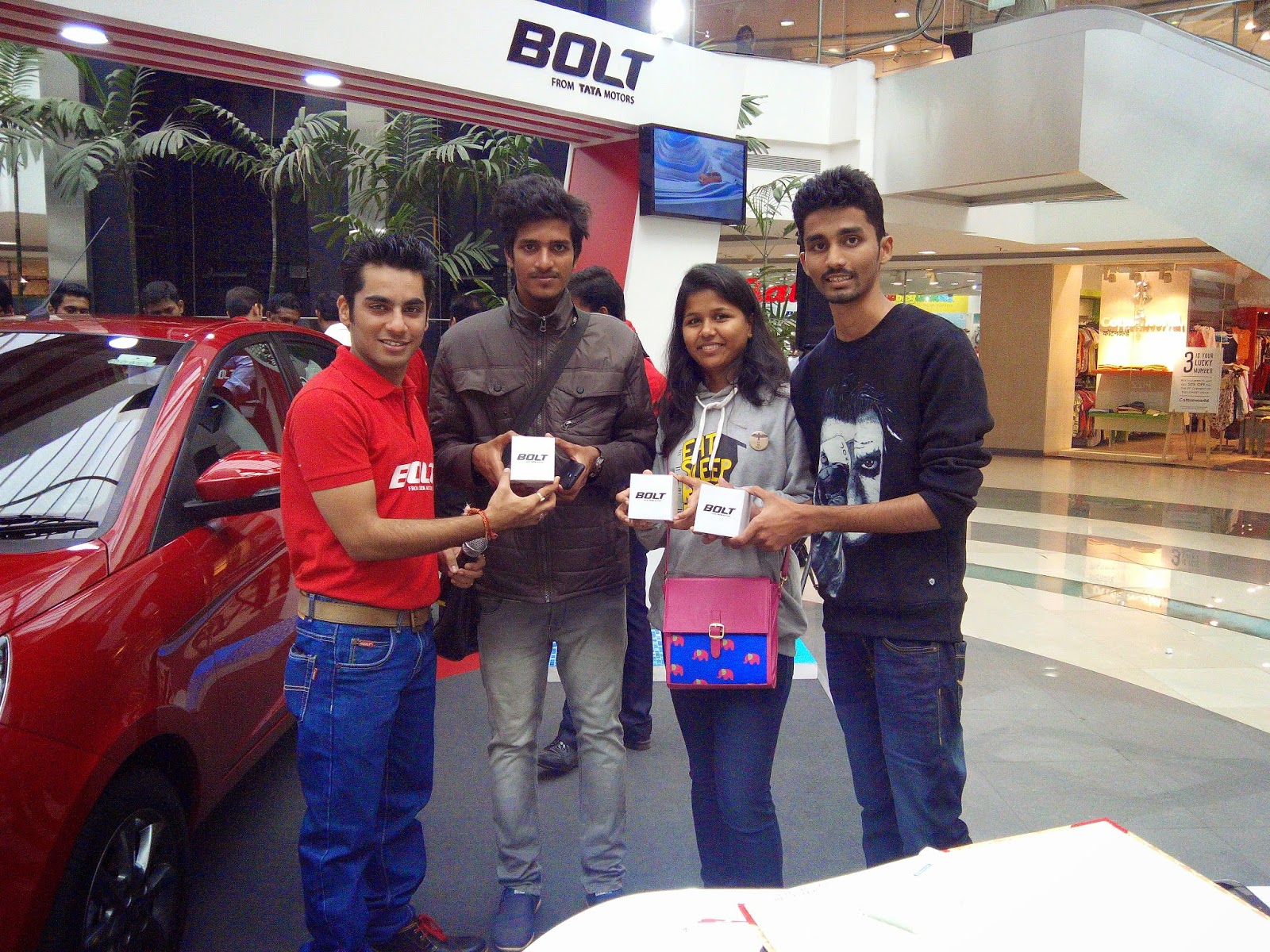 For those who are willing to get to Bolt asap, Bolt Arena offered the following!

For those who couldn't make it to Bolt Arena, here is the schedule and it goes on till Jan 28th
You can Still get the bolt experience!

Thanks to Blogadda & Tata Bolt for this fun filled experience, me and my friends loved it! 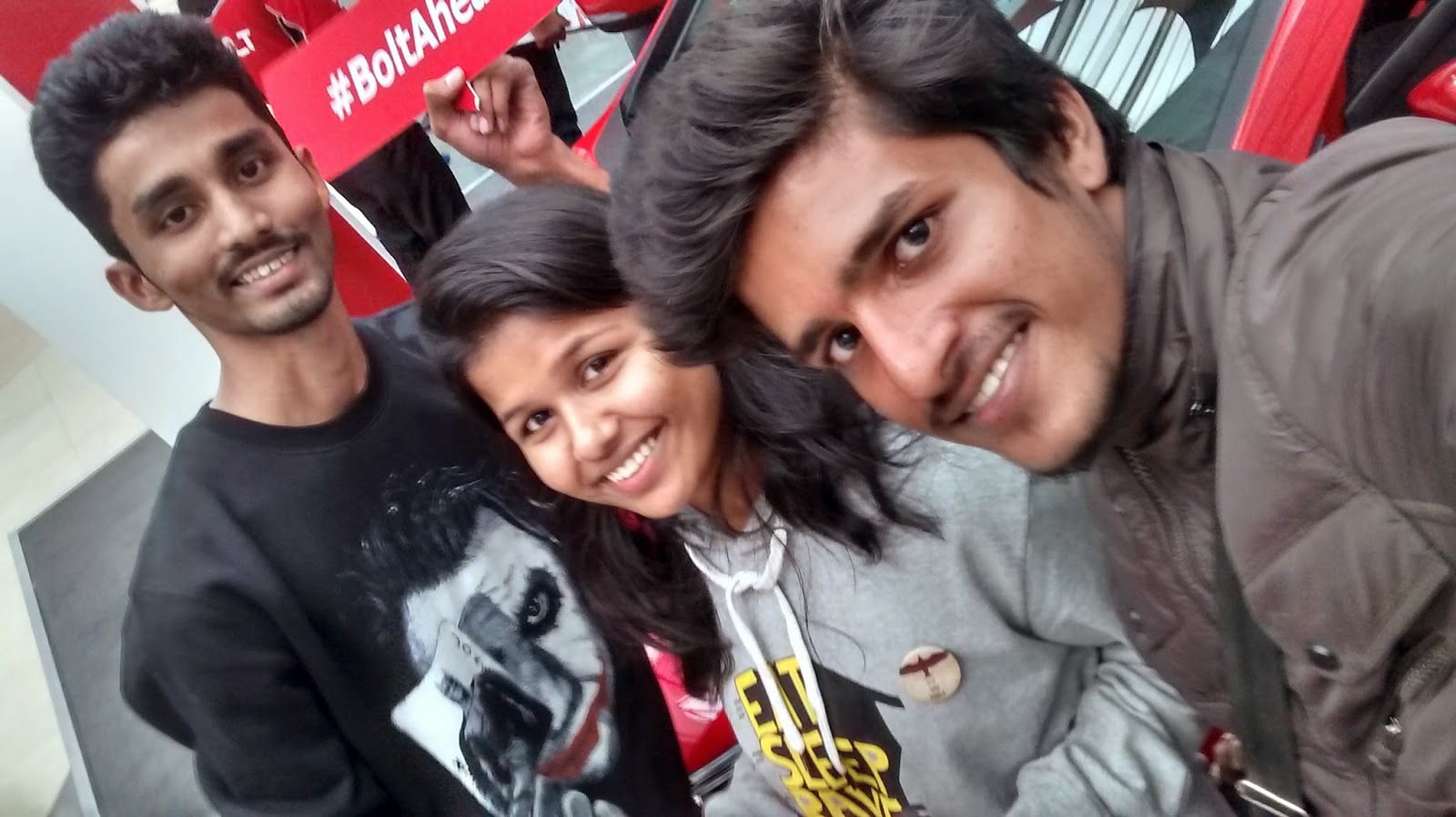 “This post is a part of the Get. Set. Bolt. activity at BlogAdda.”