Is Laundry only a Woman's Job?

- January 18, 2015
Not written for the Contest, instead in support of the Campaign.


Before I start with the Post, I would want my readers to have a look at some of the household statistics regarding Laundry collected by Ariel's survey conducted by AC Nielsen. 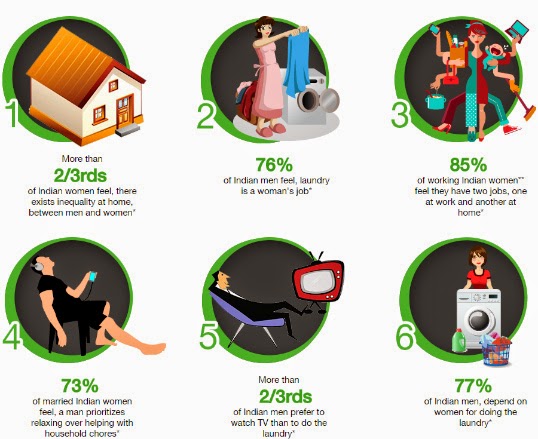 Does this look like the scenario in your home?

I will ask you a question
"Is laundry only a Woman's Job?"

The Statistics which are shown above were thought provoking & Staggering for me.

I don't know if the stats were required, the question alone drove my mind to chaos!

The expected answer when this question is asked must be "NO"

But I took a pause to think!

So how did that happen?

Only women are supposed to do laundry this thought was well inscribed in my mind since child hood?????

I got restless! I myself speak so much about Women Empowerment, respecting women and need for equality. But I realised my own mind is corrupted with some Male chauvinist ideologies.

I went around asking the women in my life. How they felt about this.
I got staggering answers which made me realise a lot more.

I quote my friend Neha's response

"Laundry is totally gender independent, not associated with only females doing it at all. I think all familiar with the infamous Dhobi Ghat, where men dominate this work. They have a much better & open mindset that no work is little or forbidden or entitled only to be done by females.
If still anyone out there with such discrimination, then they better wash their dirty minds than their clothes."

For men "Laundry" means just Washing of clothes & drying them, those with Washing machines would say it only involves pushing the load into the washing machine and then taking it out.

Ask a women. She will tell you. Doing Laundry is not a sprint, but a Marathon starting with Picking clothes, bed sheets, blankets & everything that has to be washed. Separating the whites, woolens and anything which needs to be separated. Washing, Rinsing, Drying them and then Folding them and neatly piling it up in wardrobes & cupboards!

The only thing I ever helped Mom with was folding or putting out clothes to dry.
I feel a little ashamed now.

My restlessness grew and I myself was eager to find out how did this ideology that women must do the laundry evolve & why did it never change?

Going through the history of laundry I read so many articles & saw so many pictures which showed me how everyone was mislead to believe that Laundry was a women's job. 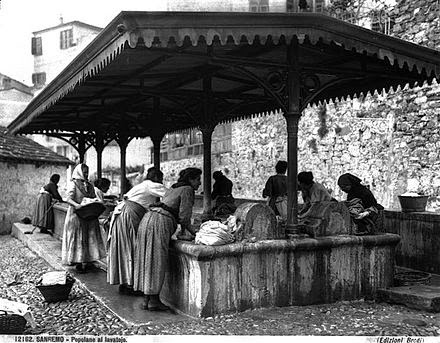 Above is a picture of a Washhouse in Sanremo, Italy, at about the turn of the 20th century. Photograph by Carlo Brogi gathered from Wikipedia.com

Regardless of the root I was quite convinced that this is a prevailing misconception which needs to be dealt with soon.


I was feeling a great chaos & lot of anger. Angry on myself for letting such a misconception creep in so easily. What fueled my anger was what I read on wikipedia next. 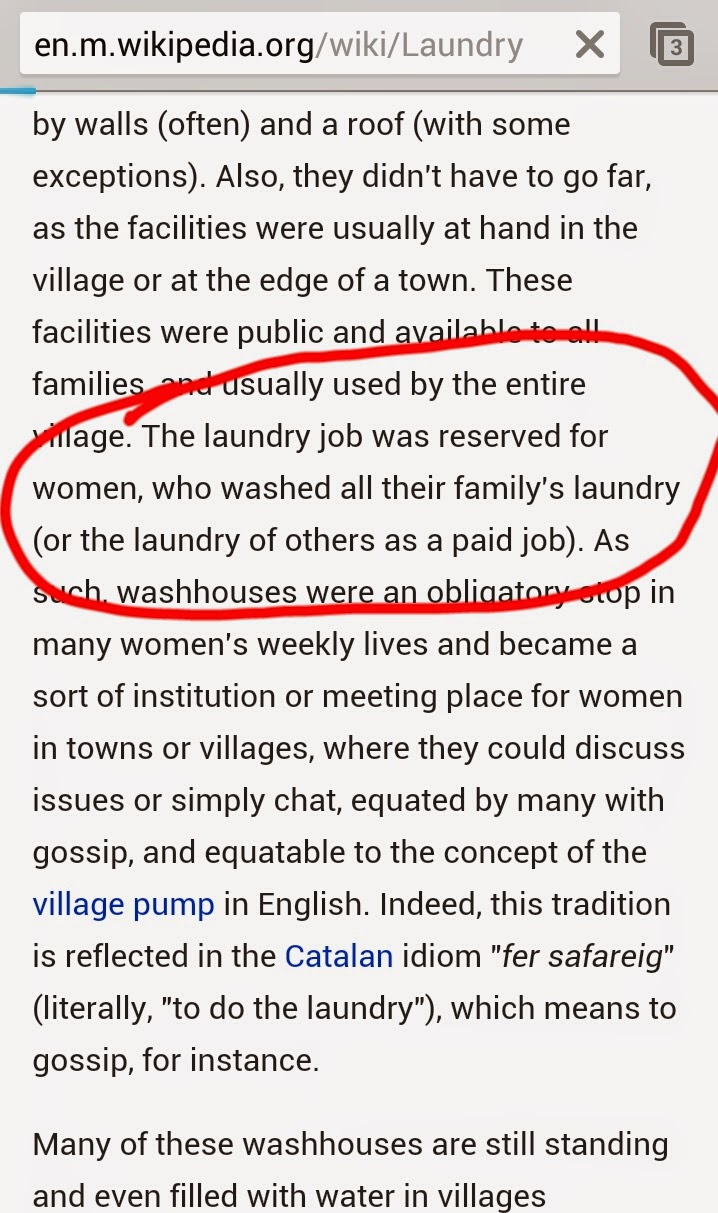 "The laundry job was reserved
for women, who washed all their family's laundry (or the laundry of others as a paid job)."


It didn't take me much time to understand that I had to edit & update this part!

After I dis, Wikipedia asked me
"How did you Improve this Page?"
I was glad they asked this question!
My reply went as follows: 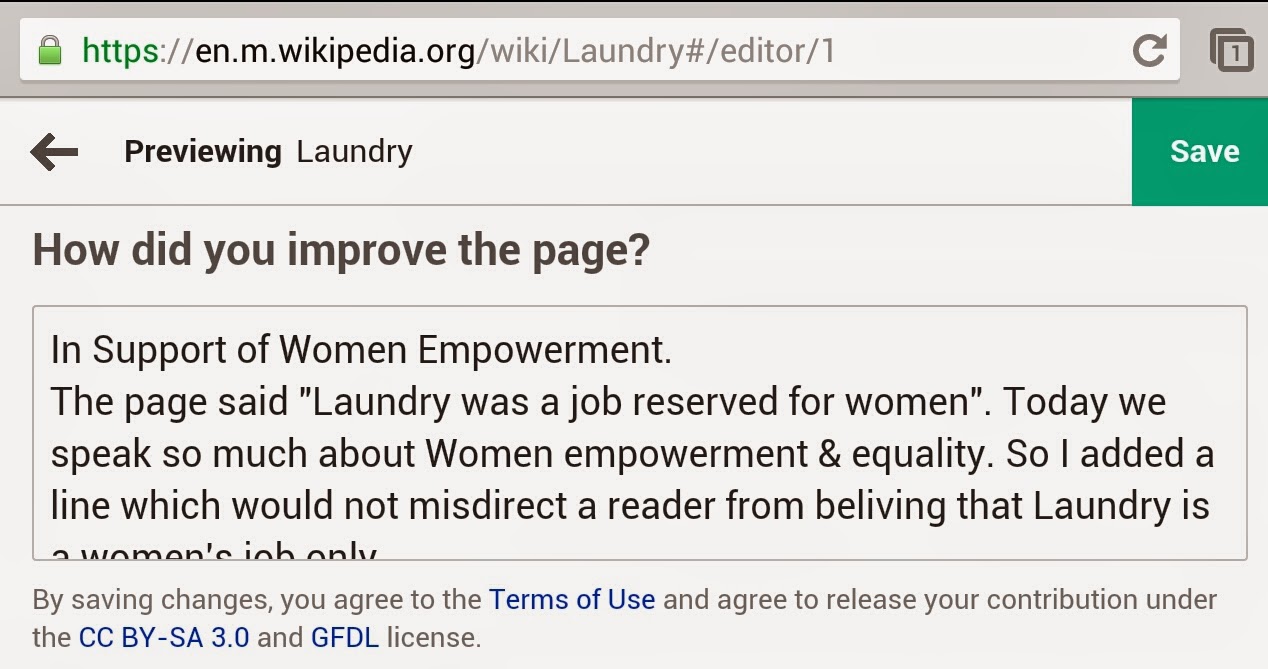 I had known of the edit option in wikipedia for long, but I never had used it in such a way.

I don't say it is Wikepedia's fault! But yes What I added there was required! 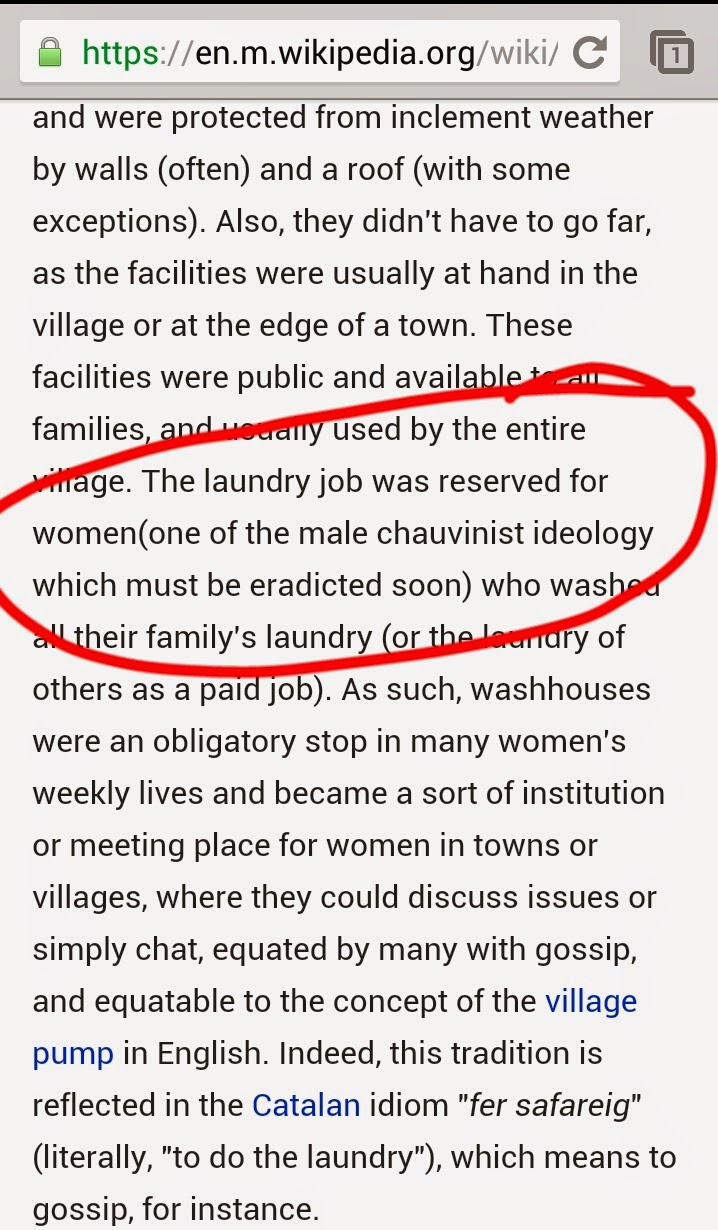 So this is for sure the best wikipedia edit I have done so far and probably the best I will ever do!

I now felt so relieved to know that I had prevented many from being misguided & have done something in support to real Women Empowerment!

I felt a little better after I did this, but I knew it doesn't end here.

Like me many a men would have been misguided into thinking that "Laundry is a women's Job only".

So I am writing this post to reach out to all the men who are victim to this Misconception!
Look within yourself, if you say You support women empowerment then do it in every way possible.

We always say Women Empowerment is happening! Women now do everything that Men do.

Considering a women Strong & Independent only if she can imitate everything thay a man does is not real Women Empowerment!

I ask you "Can a man do anything that a women can?"

Now I will give you the stats, 50%+ Men can't do a women's chores with the same efficiency like a women.
This is not a Surveyed statistics, but this is my anticipation which I am quite sure of.

So its not the women who have to change. Its we Men.

Lets be equal!
We need some Men Empowerment!

Yes Solution to this problem is that in every households the chores are well divided among everyone , regardless of they are Women or Men and irrespctive of what the chores are.

Not only this! We must educate the future generations about this well so that the misconceptions which crept into our mind don't corrupt theirs!

Next time when there is a similar survey, it shouldn't be so unbalanced!

“I am writing for #IsLaundryOnlyAWomansJob activity at BlogAdda.com in association with Ariel.” 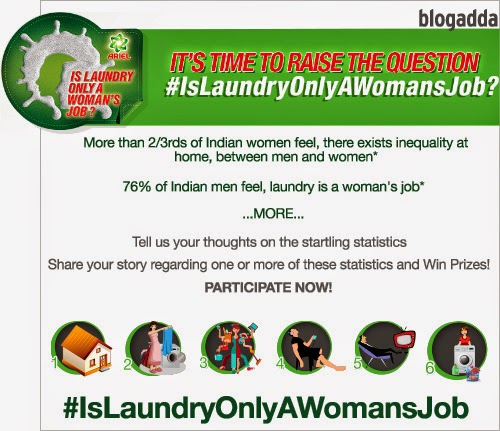