On 2nd Novemeber, the fourth day of The 5th edition of Tata Literature Live a Awards Ceremony was held in National Centre for the Performing Arts (NCPA),Mumbai to felicitate the noteworthy and outstanding contributors in Literature. 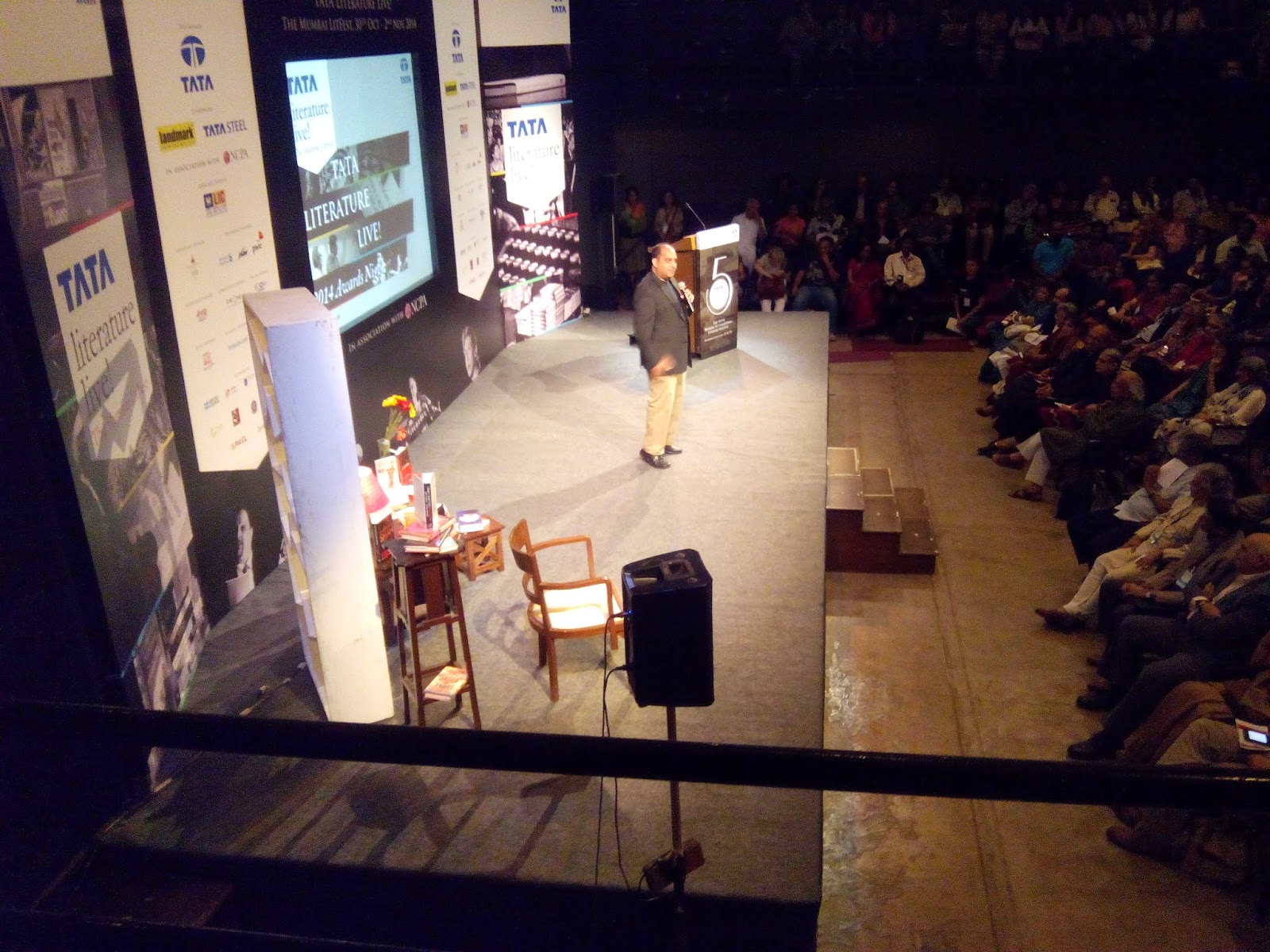 When Mr. Anil Dharker addressed the gathering spoke about how he was enthusiastic and proud about the new additions. He pointed out tha Poet Laureate Award was introduced with the objective of honouring the most inspiring but oft-neglected literary form of Poetry. 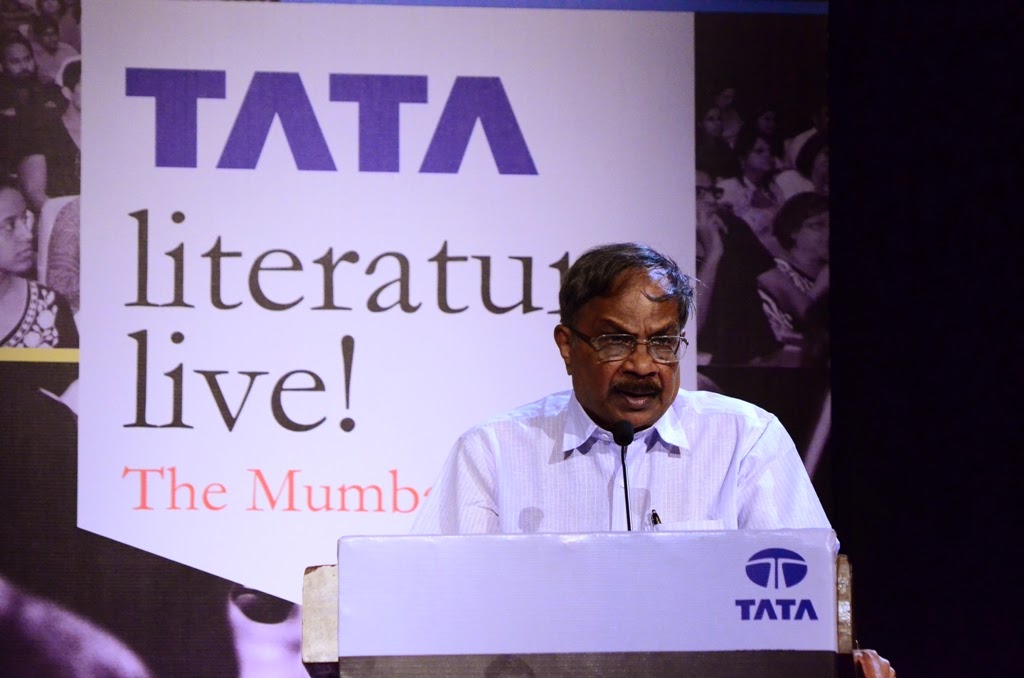 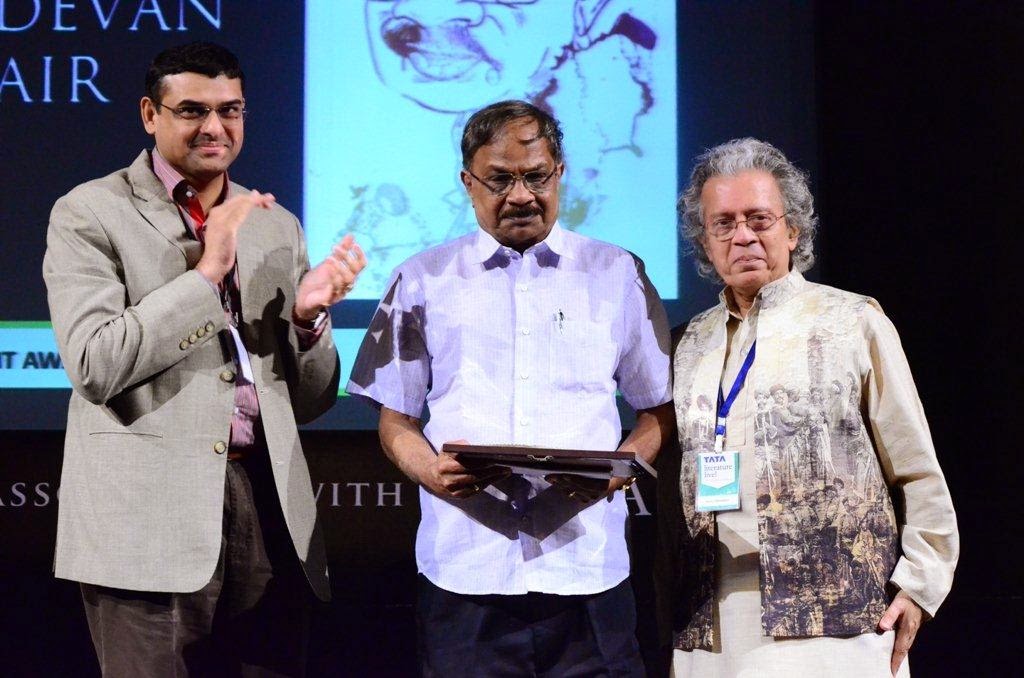 Recipient of 24 literary awards, and over 30 film awards, Nair, at the age of 81, has received the country’s most prestigious literary awards - the Jnanpith and several Sahitya Akademi awards.
The award was given away by Dr. Mukund Rajan, Member – Group Executive Council and Brand Custodian, Tata Sons, and Founder and Festival Director, Mr. Anil Dharker.
Motivation it was to witness M T Vasudevan Nair receive this award when he spoke about his roots, his village in Kerala and the struggles he went through. Receiving the award he narrated his story about how he got his first few works published in a magazine.
What impressed me best was how he spoke about the art of writing
“ In my adolescence, writing was a game I could play alone. After 700 works of writing, I am still nervous like a student attempting his exam. I believe the reason why writers are different from non-writers, is that they are much more sensitive to the pain, the pleasure and other finer aspects of life.” 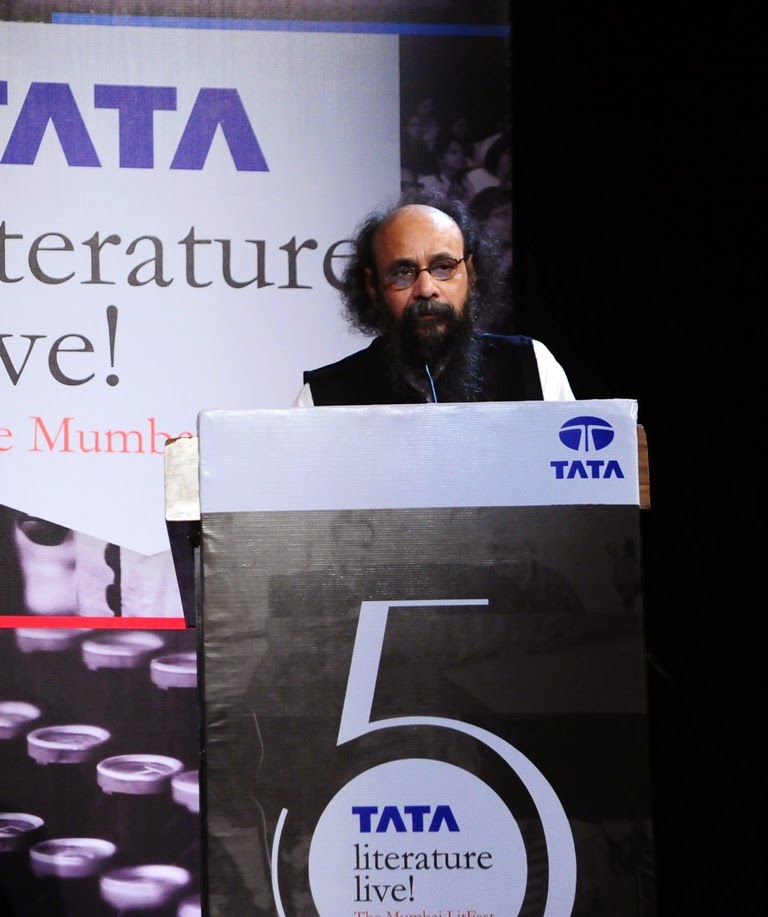 Acclaimed poet, Mr. Ashok Vajyapee and Mr. Khushroo Suntook, Chairman, NCPA, felicitated Goswami at the awards ceremony.
Goswami spoke on how he was surprised to receive a call from Anil Daharekar about the award.  His poems which are in bengali are translated by Sampurna Chattarji, a poet & novelist. Some of Joy Goswami's poems were read out by the host Anuvab and Sampurna Chattarji. Goswami read out a beautiful poem which he had written specially for the event.

The Shortlisted in Fiction category were 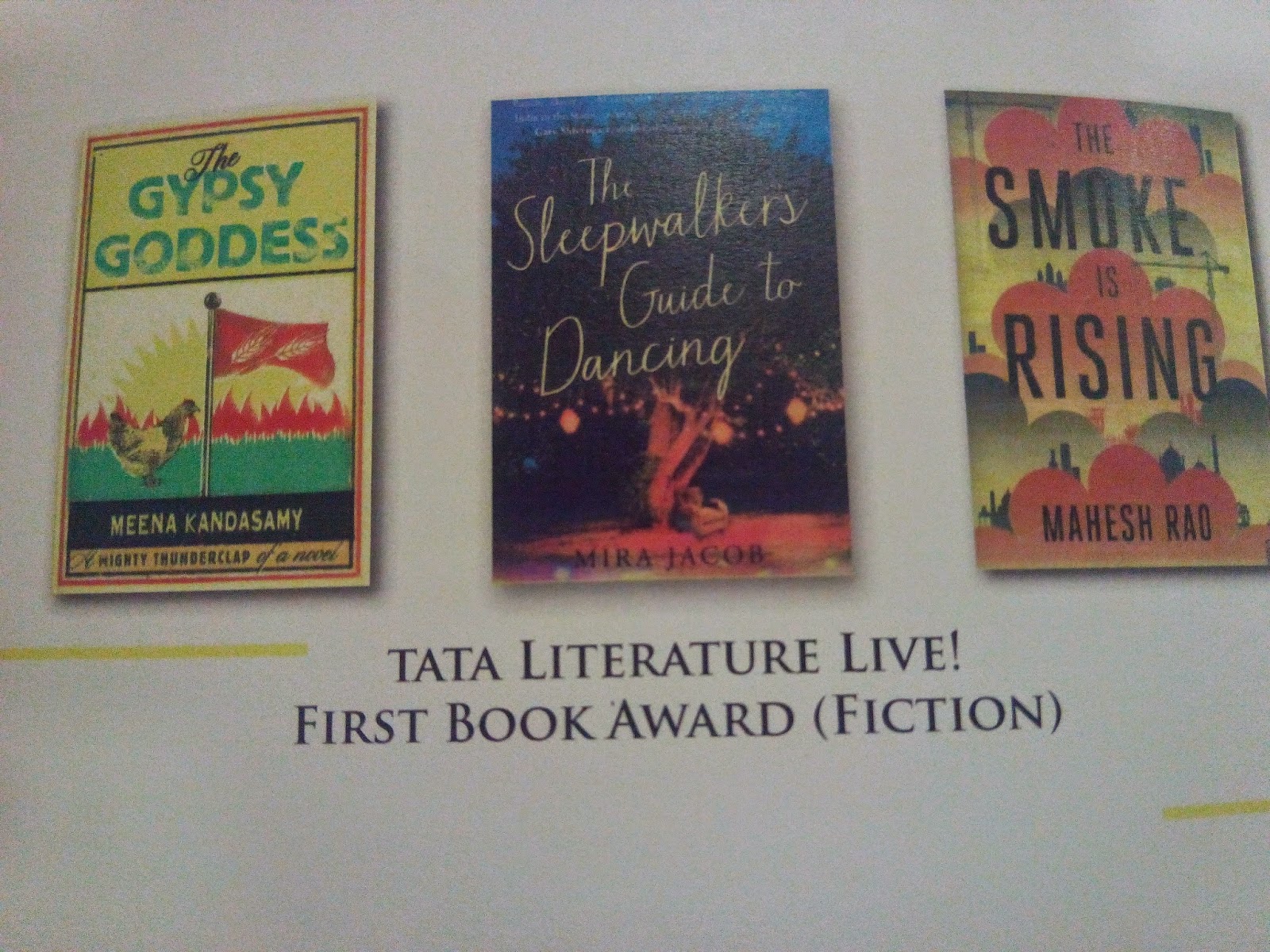 This award went to Mahesh Rao for his savagely funny and deeply poignant debut fiction, ‘The Smoke Is Rising’ by . The book is a riveting portrait of a city hurtling towards an epic clash of modernity and tradition, and all the wandering souls – some hopeful, some broken, and a few somewhere in-between – who find themselves caught in the middle. The award was presented by Carol Andrade, a Senior Journalist, an esteemed member of the jury

The Shortlisted in  Non-Fiction category were 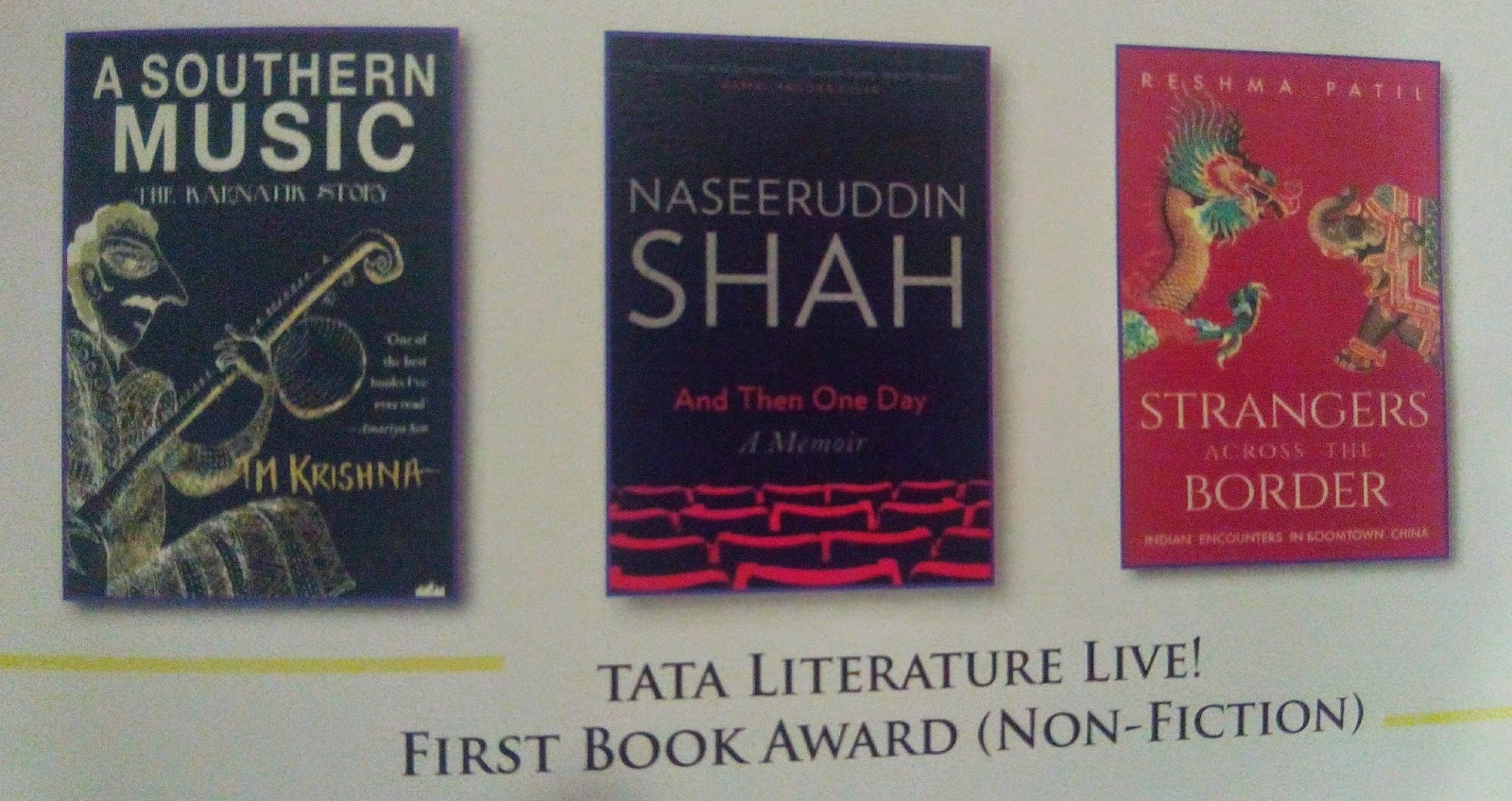 This category saw Karnatik music vocalist TM Krishna emerge as a winner for his book, ‘A Southern Music: The Karnatik Story’, which meticulously and lyrically explores every aspect of the world of Karnatik music. Krishna is a recipient of the Bismillah Khan Yuva Puraskar Award by the Central Sangeet Natak Academy. Madhu Jain, Author and Editor, and a member of the jury, announced the winner


Tata Literature Live! Business Book of the Year Award
The Shortlisted were 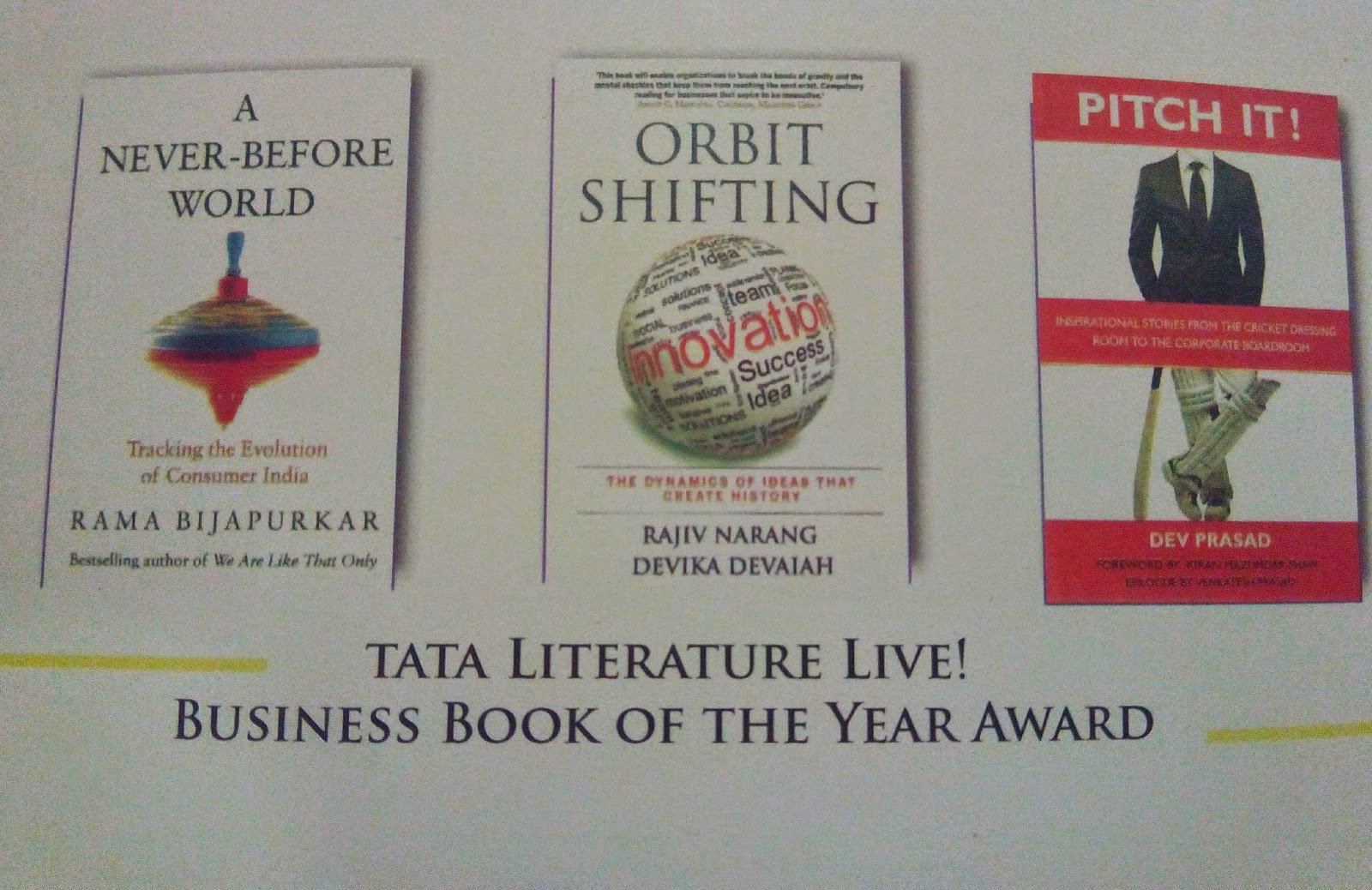 This award was won by Rajiv Narang and Devika Devaiah for their book, ‘Orbit-Shifting Innovation - The Dynamics of Ideas that Create History’. This book empowers readers to overcome obstacles to innovation and provides the tools to maximize the impact of transformative change. Narang was part of the National Planning Commission Panel to recommend ‘India's Innovation Strategy’. Devika Devaiah is the Director of Erehwon Innovation Consulting. The award was given away by Ms. Neeru Nanda.


The Tata Literature Live! Book of the Year Award

The Shortlisted in Fiction category were 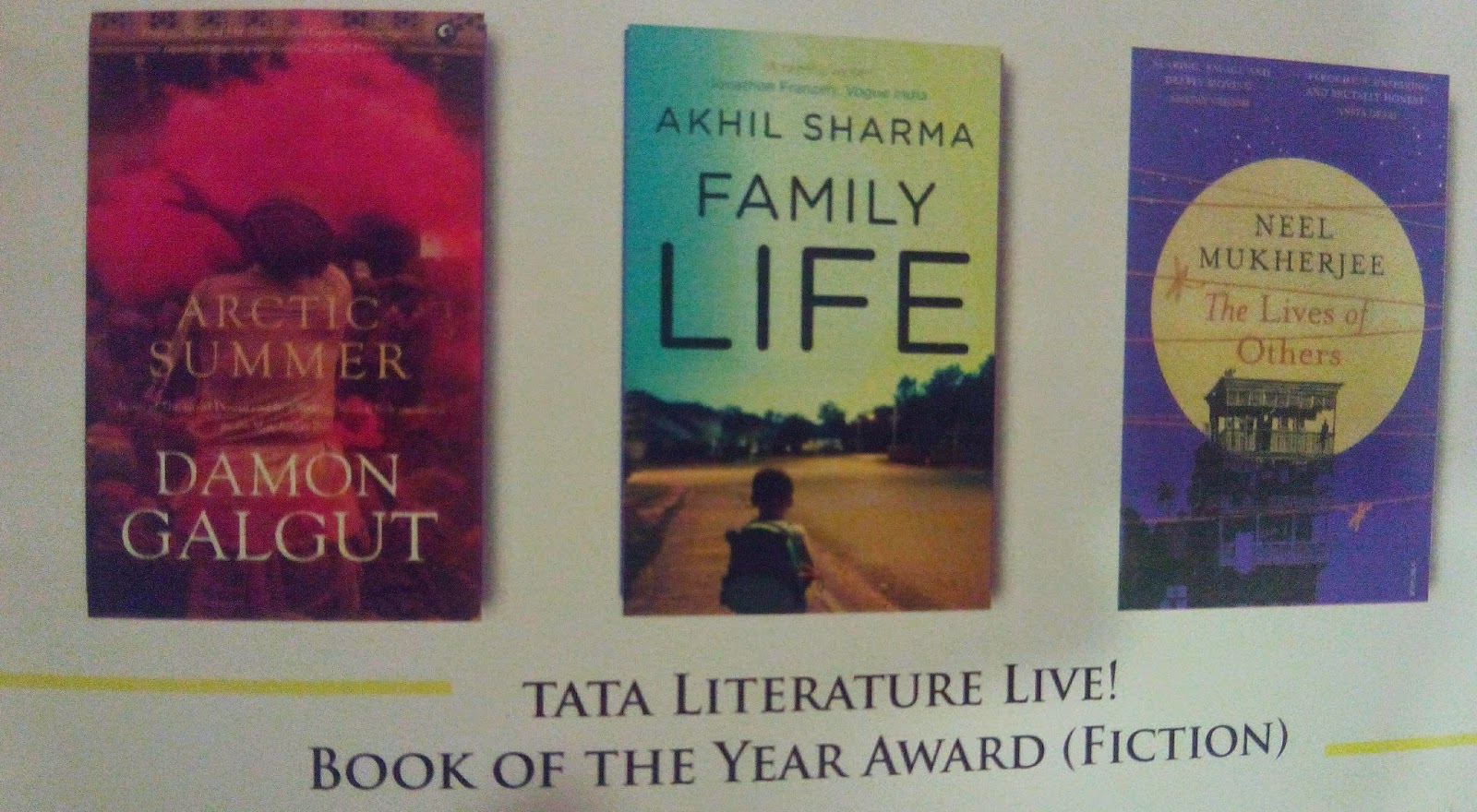 For Fiction, went to Damon Galgut for his book, ‘Arctic Summer’. Meticulously researched and vividly imagined, Arctic Summer conjures up the figure of E.M. Forster as he struggles to write his masterpiece, A Passage To India. Galgut’s earlier works have been shortlisted for the Man Booker Prize and the Commonwealth Writer’s Prize. Poet and Author, Arundhathi Subramaniam (jury member) announced the winner

The Shortlisted in  Non-Fiction category were 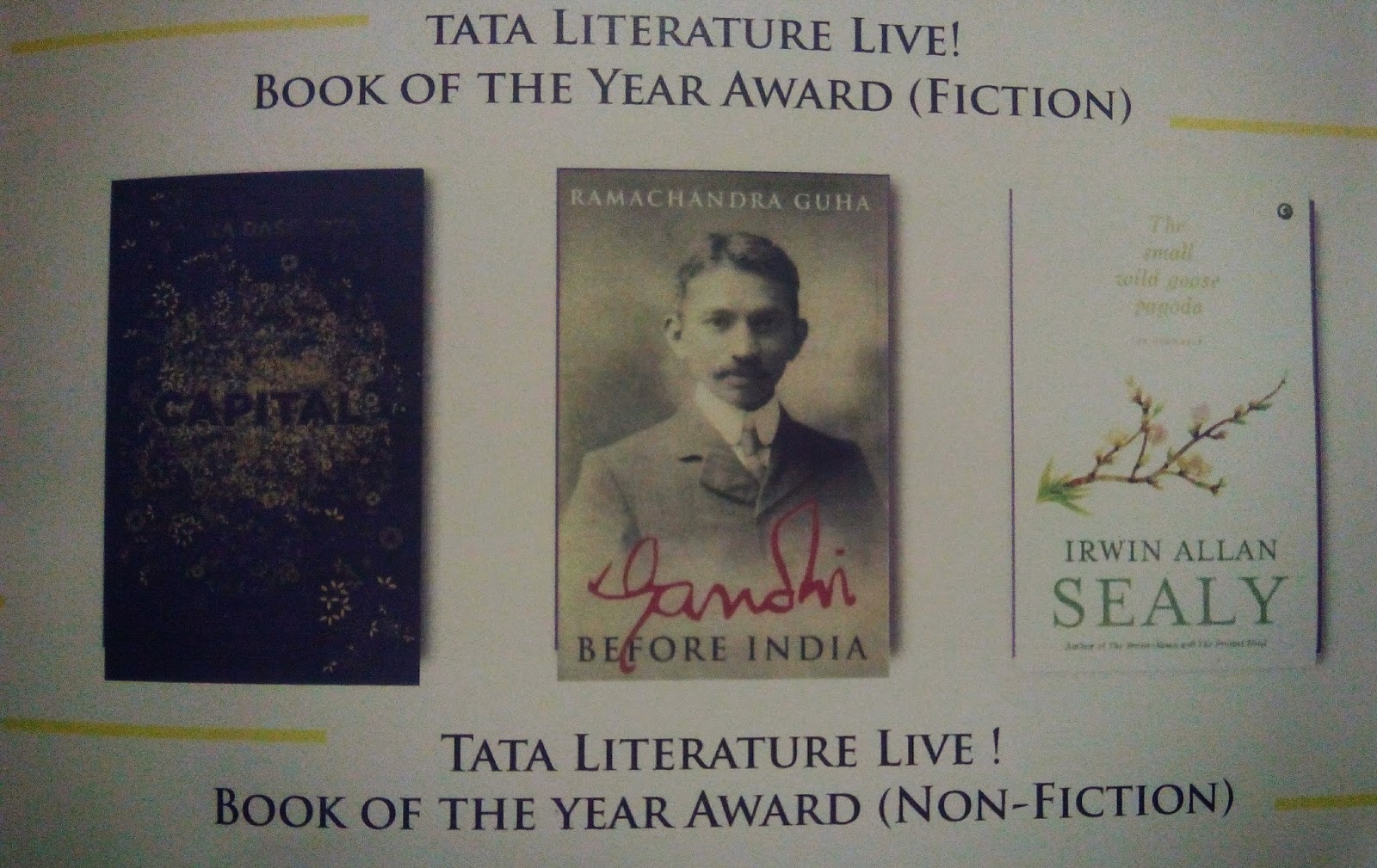 In the Non-Fiction category, Rana Dasgupta won the award for his book, ‘Capital - The Eruption of Delhi’ in which Dasgupta examines one of the great trends of our time: the expansion of the global elite.  Capital is an intimate portrait of the city of Delhi that offers a glimpse of what capitalism will become in the coming, post-Western world. Dasgupta’s earlier book 'Solo' won the Commonwealth Writers' Prize Best Book: Europe and South Asia. Senior journalist, Dileep Padgaonkar (jury member) announced the winner


Extremely happy with this year’s edition, Dharker said, “I can't believe that the 5th Tata Literature Live festival is coming to a close. It has been an incredible four days. We have had a huge turnout of audience that we can't believe. Our sessions have been full and we have had live projections to other venues which have been full as well. All three venues of Prithvi were overflowing. Literature has taken hold of the city in a significant way and perhaps Tata Literature Live has contributed in a small way to that.”

Dr. Mukund Rajan said, “The Tata group has always supported and encouraged art and culture. Our congratulations to the remarkable talent that has been recognized with the Tata LiteratureLive! Awards. A festival like this cannot be successful without the whole-hearted and enthusiastic participation of literary enthusiasts, and we are delighted that they have come in large numbers this year, to participate both in South Mumbai and the North Mumbai venue that we have introduced for the first time. We look forward to the festival going from strength to strength in the coming years.”