Disgusted about my surname-Shetty, against Racism

The title is provoking, but the intent is to create awareness about Racism by narrating a Real Life Incident. No claims are made telling that the whole community is Racist.

This post is different......I didn't plan much or write this in a text file to fine tune,proof-read and than post.
Instead I entered my home, came straight to my laptop which was still connected to blogger showing my blog stats. Clicked on posting and started writing this post.

I am full of Disgust and Anger, which I want to express otherwise I will end up breaking things at my place.


Eminem- No Love lost, No love found playing in the background in Windows media player.
Hell No!!!This is not a post break-up write!!

Full of anger and mixed feelings but I would not like to spoil this post and would feel better only if my message reaches to all the folks around me.


The Scene: Racist SHETS & the Victim DIKHAS.:
To start with, I was in a good mood or I can say Happy go lucky mood this morning. Even though that is a irony for a Engineering student to say so, I was really in good mood in spite of having exams soon and not being prepared for it. I was not very much bothered and was managing to stay happy.
But than I went to town with mom to help her out with some Bank work and to buy grocery for the week. After that my mood underwent a intense change. I don't know exactly because of what this transitions happened but I can list out few scenes from the day, which I know triggered this violent mood in me.

When entered the bank with my mom. I was determined to get my work done soon and move out, so that I can reach back home soon to check Facebook  for anything new.
I waited in the line for depositing money. The person ahead of me in the line was a Short person with wrinkles on his forehead and was a little shabbily dressed. He maybe not well-educated and so was struggling to fill the withdrawal form. Finally he got it done and passed it to the bank cashier. The cashier went through it once and than threw it back to the person saying that its not filled properly and he will have to do it again. The person asked in a low tone where he had gone wrong. The cashier didn't reply and gave him a stare for a moment and than shouted NEXT!. Next in the line was me but the incident with that person had left me shocked and I didn't move. I took me some time to gather myself when I did, I moved ahead with the cash and form. This incident made me sympathize on the person who was still struggling with the form, but till than I didn't feel anger against anyone. I justified the rude behavior of the bank cashier to myself by assuming that he maybe having a bad day. I wanted to help the other person as soon as I get my work done.
As the cashier was counting the notes which I gave him, Another person entered the bank. Two things were very much noticeable about him. One was his pot belly and other his gold chains dangling over his bright white shirt. He was carrying a key in his hands indicating he had a nice ride too. I could see him walking straight up to me, he stopped next to me and peeped into the counter window and told to the cashier that he wanted to deposit. I was having a grin on my face expecting the cashier to bark at him about not maintaining the queue. To my surprise, the cashier rose from his seat and told the person to wait till he fills a form for him. He referred to the person as 'shet'. Now that was the limit, the cashier had not done with me and still went to get a form for the so-called shet.
While the cashier was not there, the person who was treated badly by the cashier earlier  walked up to the counter window. I could now imagine the cashier referring to this poor guy as 'bikhari' and scolding him again. Something similar happened when the cashier came back, seeing this person behind the window he asked him to get in line in a stern voice. When I looked at the Person's face, It had no expression as though he had expected and got used to people treating him like this.Still I could hear his soul shouting questions at  God asking "What have I done? WHY ME?".
Than the shet returned and the cashier took the money from him and gave a slip. The shet who had just enjoyed a nice show seeing someone below his caliber getting humiliated asked "whats wrong shetty?" I was startled, because I am also a Shetty(last name). To that question cashier gave a smile and told how he was irritated with those dikhas. 'Dikha' was a word in local language used to refer to People from low caste. While continuing explaining his hardships dealing with so called dikhas, he counted the notes I had given him and gave me a stamped slip with a smile to which I gave angry and disgusted look. I took the slip and walked out of there because I couldn't stand the place anymore.
Then me and my mom went through the market to buy vegetables for the week. I still had the scene from the bank in the mind and the faces of those racists shets and the victim dikhas going through my mind.
What had effected me even more was that the cashier and I belonged to same caste. We were the Shetty's. I had always been proud of this surname which I got from my dad and even used to write my last name before my actual name, you can even notice it in my blog link!! But today I was felling disgusted about being one.
Is this what being a shetty means? Being racist? Judging someone by his color, appearance or clothes?
Thinking about this, when I passed few shops in the market I couls see many faces which looked similiar to the Ill treated dikha. But this was not a place similar to the bank. Here everyone had a humble tone and even the fish mongers spoke with a sense of respect to anyone either he was a shet or dikha.
When they were not discriminating among anyone than how could well educated people in the bank do it?


MY MESSAGE, to mine and coming generations:


This is not the first time when I have come across such incidents? Even you may have some such experiences, don't you?
Have you ever been the racist? or the victim?


My request to the new generation is to inherit anything but not such nature from your parents. Many times We may have heard elders at home talking about someone belonging to low caste or creed. Why does it matter? Try...try hard not be influenced by such thoughts and replicate their behavior?


More than Global warming and pollution, I would really want racism to wipe out in the coming times and I would want my generation NOT to discriminate according to color, religion, appearance or caste.


I hope you understand what the victims maybe feeling and how badly they may have got effected!
Next time your mind tries to judge anyone based on his appearance or background, ask your heart would you like to be discriminated?


Never according to a person's appearance decide whether to be friends with him/her or not.


Its the nature and compatibility which matters.
Don't you love your Grand parents even though they look old. Now if you say that they look good. I would ask whether they look better than Angelina jolie or Bradd pitt? No right? still you love them....so stop discriminating!!


If this continues, God will stop giving us unique identity and looks and will put the Human production process on a conveyor belt, where all the humans created by god will have the same looks and personality.


THE POEM: AGAINST RACISM! 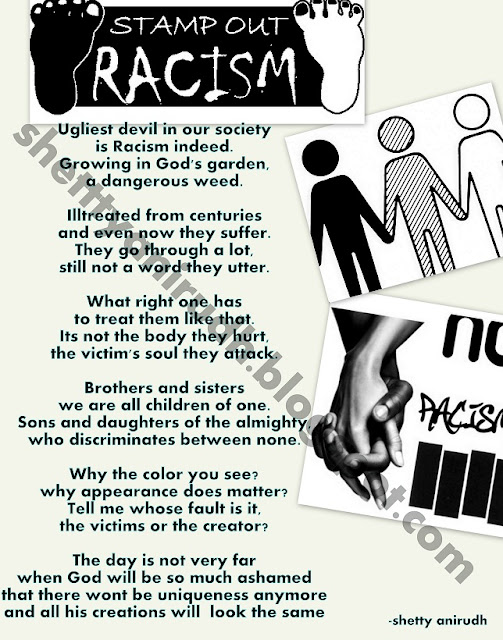