From Resignation to #Cycling2Work! - Part 2

Hello readers. this is  Part 2, Continuation on the previous post. 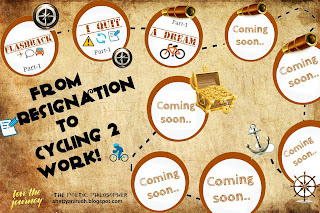 In th previous post, I wrote about how I came to the decsion if quitting my job and how the decision got changed. Also I wrote onn the pros and cons of my IT job and how the thought of buying a bike(bicycle) came to my mind.

In this part I continue about my Wanderings and Wondering about buying a bike. 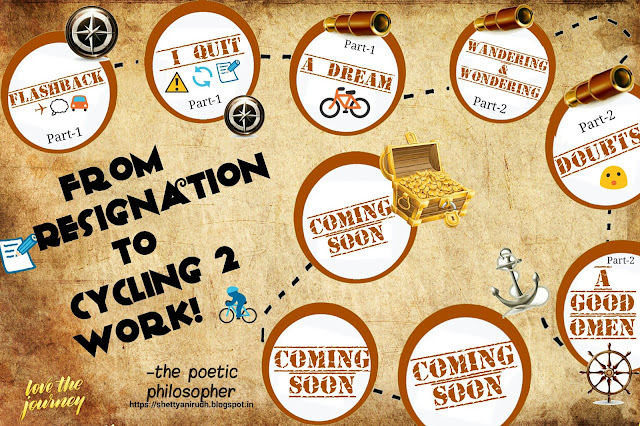 Even though the idea of getting a bike brought a lot of excitement, there were some doubts lurking in my mind.
Those worries or doubts were as follows


The scariest of all, will this too become like a new toy thing meaning I will buy, use and treasure it in the initial days later to get bord of it and neglect it.


The last time I had bought a cycle from a shop it was a Red Razorback by Hero Cycles in 6th or 7th grade. So I remember Cycle to be like a thing for children's recreation and the Indian market for Cycle too catered the children. So I was unsure about how to get the perfect one for my use and not look like a grownup on a kid's bike.

I already had a big list of things to be bought which also had a Mobile phone in it. The smartphone I was using was not  over 3 years old. My colleagues also advised me n buying a phone instead of a bike. Anyhow that advice made my resolve to buy a bike lil more stronger.

So when I sat down to weigh my options and think through the decision of buying a bike, Team Bike had very less points compared to all the worries listed above.

As a good omen, came in Cycle Village, a Facebook page of the nearby Firefox outlet in Mira Road. Till then I had not heard of Firefox or Trek.
The page had me glued to it swiping down their timeline, reading, enjoying and liking all their posts. Some were cycling advice, some were cycling apparels, some were cycling inspirational posters, some were reviews by happy customers, some were cycling trips or cyclothons organised by them.
I went through some of the patron profiles and there were so many from my city itself. There was a club in my city with the name of Mira-Bhayander Cycling club. Throughout Mumbai so many passionate cyclists were there. It was like I was introduced to a new world.

This is not a commercial post for promoting anyone, but I have Cycle Village to thank to bring out to my notice this new world and rekindle the passion for Cycling in me.

The second worry of being a grownup on kid's cycle also no longer existed. The range of bikes offered by Firefox  covered every age group and moreover every kind of Cycling. Instead I would have to put in time in deciding which category of cycle I must look for and which I must buy (the next post is about that).
BTW Firefox was also bought by Hero Cycles ;)

The third worry of the Budget and Priorities  no longer occupied my mind. My birthday was nearing and I had decided this would be the best time to implement this decision. So there was no looking back.

Cheers :) it was really fun writing this post. i could feel all the excitement coming back. I write this post after 2 weeks of buying the bike...so... lot of catching up to do...
Next weekend or if lucky before that i will write how I made the decision to buy the Bike I have now.