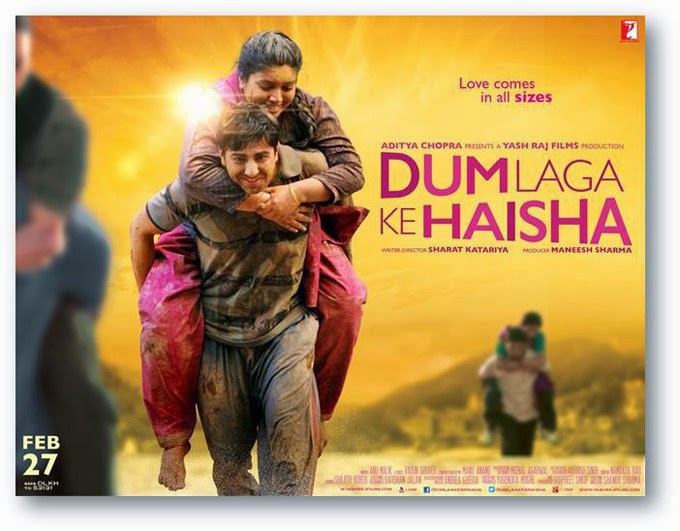 Before I start talking about the movie, I would like to put light on the atmosphere I saw the movie in.
I was in last row with my friend, the whole row was filled with Girls. So we were in the centre flanked on both sides by Girls. So if my review comes out to be a little girly then bear with me...lol
The plot set in 1990's shows beautiful glimpses of Haridwar & Rishikesh. Its a treat for people like me who grew up in the 90's to revisit those days of  Audio Cassettes & the emerging VCRs.
Haryanwi tone of Hindi they speak is adorable and fun
The story is what I won't reveal much about. Its starts with Ayushmann's character Prem fighting with his family when they speak about getting him married. Moments later he is wearing Sehra and already getting married to Bhumi Pednekar who plays Sandhya. I would promise you this, in the first half you will be enjoying the picturization, dialogues & the characters. After the interval everything will get over in a blink and you will surely love the way they conclude it with the "Dum lagake" contest.
Ayushmann Khurana as Prem Prakash Tiwari was perfect for the character of being the helpless Dulha.
Bhumi Pednekar as Sandhya Verma plays her role very well as a educated girl who knows what is right & wrong. Let her explain to you "Law of Gravity" and she will mesmerize you for sure.
Others I want to mention are Sanjay Mishra as Ayushmann's father and Sheeba Chaddha as his aunt
They ads a lot of fun to the movie. With Sanjay Mishra being the funny father and running behind Ayushmann with his Chappal every now and then. Sheeba Chaddha being the sarcastic aunt adds lot of humor with her quirky dialogues.
All character are very much realistic & no one  seems to be extra bad or good. Everything in the movie is just real life like and nothing blown out of proportion.
More what I must add is the film was not interrupted by weird Ad placements nor ADs during the interval. And get this 80% of the a waited for promotional song with the credits. Yes, Dard Karaara"  by Kumar Sanu & Sadhana Sargam.
And yes a Song Fight between Prem & Sandhya which you will enjoy, look out for that. You will know, when yoj watch it.
To sum up it was a Very Sweet Comedy which fills you up with sweetness & happiness.(or maybe it was the result of the Dairy Milk Caramel I snuck into the theatre)