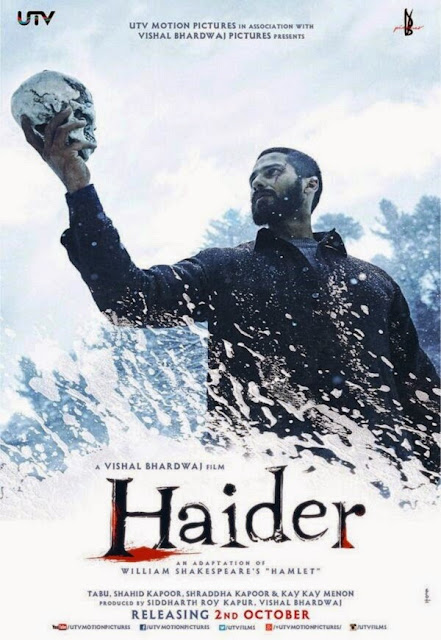 A lot of work has gone behind making this film, and it doesn't aim towards commercialization but a honest & smart tribute to the Classic Shakespeare play. Hamlet is said to be one of the most tragic plays. Haider captures these tragedies brilliantly.

The plot weaves the storyline of the Classic very well around Kashmir conflicts.
The required angst and darkness in each character is brought out well. The way the story is divided between and after interval is very clever with enough space for both Haider's confused and determined to avenge avatars been potrayed.
The soliloquys and dialogues gives goosebumps. Many of the ideas from Hamlet are elegantly redefined. The "To be, or not to be" speech poetically delivered by Haider. Haider's sattirical speech on AFSPA act.
"After giving such due warning, Fire upon or use other kinds of force even if it causes death, against the person who is acting against law or order" This particular line caught my attention with the way the crowd chants Law & Order.

Humor may find diificult to make way in such a script, but time and again we found ourslelf laughing over witty dailogues with the best being the coining of the word "Chutzpah" by Haider

Given the topic of Kashmir the movie could be easily pulled towards controversies but care is taken to not exaggerate thus preventing any controversies.
Even the concept of Oedius complex* between Haude & his mother is put out very subtly.
*Oedius complex- Child's desire to have sexual relation with parent. 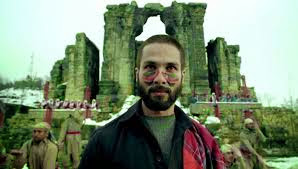 The Music is what provides a required tempo to the movie with an energetic background score which couples few scenes making the audience feel an andrenaline rush.
Each song jumps to a different category.
The fusion of strong electric guitar and drum beats in the song "Aao na" narrating Haider's inner revolution is a master piece. Salutes to Vishal Dadlani.
The song "Bismil" is the song which made me go "I wanna watch this movie" when I chanced upon it in a trailer. This song itslef is a play depicting Haider's Father's story and the conspiracy. Shahid's dance is one thing to look forward to in this song where Dumhal, Kahmir's tribal dance form is portrayed.
These two songs are a stand out while many more songs are aptly placed.

Shahid Kapoor's acting is brilliant and totally out of the box. Appreciated more for his Chocolate boy looks and characters, he has gotten into dark gloomy role yet again like his previous movie Kaminey with Vishal Bharadwaj. His dialogue delivery and expressions is spot on according to the scenes and the madness inthe character spills out after interval in a required crazy way.
Undoubtedly Kay Kay Menon does full justice to the charcter of Evil uncle. With the guilt, evil, love for Gahazala and high levels of arrogance he gives the character a very realistic base.
Tabu follows suit, with the melancholies of being a mother and a half widow. She brings out the required emotions and chaotic feelings of the mislead mother very well.
Irrfan Khan's mysterious character Roohdar gives a entry for which audience cheered and applauded, his typical dialogue delivery was perfect for his character. Unfortunately his character didnt have much in the whole movie, I personally wished to see more of him.
Shraddha Kapoor plays a Journalist & love of haider. The essential chemistry between Haider & Arshia is brought in by her. While in the first half her character seems to be passive and subtle, it picks up in the second half.

I have watched Maqbool, Omkara & Kmainey and I will call this Vishal Bharadwaj's best work.
A must watch.